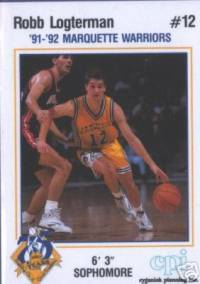 Logterman was a two-year starter at Clinton High School averaging 18 ppg as a freshman and 29 ppg as a sophomore. But after two seasons at Clinton High School, Logterman's family moved to Janesville and he transferred to Janesville Craig where he finished up his last two years. He still holds the Clinton Boys Basketball records for most points in a season, 591 (1987-88) and most free throws in a season 148 (1987-88).

Robb averaged 22 points and six assists as a junior at Craig. As a senior Logterman averaged 28.1 points and 4.8 assists, shooting 63% from the floor and 87.3% from the foul line. He made 69 of 157 three-point attempts (43.9% made) and was a first-team All-State player his senior year. He was a two-time All-Big Eight Conference selection and 1990 Conference Player-of-the-Year as well as the 1990 Wisconsin State Journal Wisconsin Co-Player-of-the-Year with Kevin Flegner of Randolph. He recorded 2,097 points during his high school career, including 671 as a senior.

He signed to play for Marquette in November 1989 in Coach Kevin O'Neill's first group of signees. 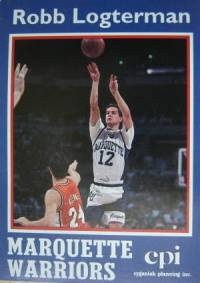 Robb appeared in all 29 games, starting 27 times. Most of those starts came at point guard (after the suspension/departure of Keith Stewart), even though he was a natural shooting guard. Logterman was second to Mark Anglavar in made three-pointers on the season with 54. He was also fourth on the team in scoring, second in assists, second in free throw percentage and second in minutes played per game (30.3.). Logterman scored in double figures 14 times, including his first two collegiate games (and six of his first seven) at NCAA finalist Duke (11 points) and at Kansas (20 points), where he hit on 7 of 12 field goals (3 of 6 three-pointers). The Kansas game was televised on ESPN and was remembered for showcasing Robb's uncanny knack for destorying L.A. Gear shoes. His top scoring performance came against St. Louis, where he was 8 of 12 from the floor and finished with 24 points. He also dished out nine assists against Detroit on January 31st.

Logterman again appeared in all 29 games, making 28 starts. Robb finished second on the team in scoring with 12.3 ppg and led the Great Midwest Conference in three-point field goal percentage (45.5%) and tied Anfernee Hardaway for the most three-point field goals made amongst GMC players. He also finished tenth in the conference in field goal percentage (48.2%). Logterman scored in double figures 21 times, including the first ten games of the season, with a season best of 20 points versus Mississippi Valley State on December 17th.

Robb started in 26 of the Warrior's 28 games during his junior season, averaging 7.1 ppg. He tied Tony Miller for the most three-pointers made (46), which made him Marquette's all-time leader in that category (169) and ranked seventh in the GMC in three-point field goal percentage (37.1%). Logterman scored in double figures ten times, including six of the first seven games. His best scoring effort came at UNLV on December 26th, where he went 7 of 11 from the floor (including five three-pointers) and finished with 19 points.

Robb was named team tri-captain for his senior campagin and in a December 8, 1993 game against visiting Illinois, he tied Damon Key for a game-high 18 points, on 5-8 shooting from the three-point line. He also scored 6 points in his last game as a Marquette Warrior, a loss to Duke in a NCAA Tournament Sweet Sixteen game on March 24, 1994.