Shannon started the first 12 games of his Marquette career at small forward, scoring 14 points two times in his first three games. Shannon lost his starting spot after scoring two points in a loss at Dayton, but responded by scoring 12 points in each of the next two games. He only reached double figures two more times in the remaining 15 contests, logging just seven points, two rebounds and no assists in the final five games.

Smith came into Marquette with high expectations, but the arrival of Roney Eford signaled the beginning of the end for Shannon's time at Marquette. Eford was inserted into the starting lineup in the sixth game of the season, while Shannon's minutes and production on the court continued to decline. By January, Eford had locked up a starting spot, replacing Gates, while Smith continued to struggle. Shannon only played a total of 18 minutes in the final 13 games and subsequently transferred to UW-Milwaukee at the end of the year. 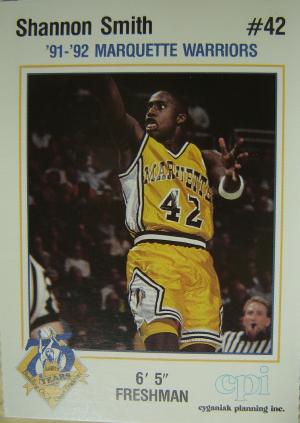