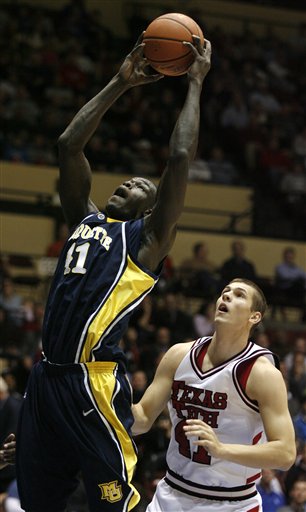 KANSAS CITY, Mo. (AP) – Steal. Fast break. Layup. Rebound. Fast break. Dunk. Marquette (No. 17 ESPN/USA Today; No. 13 AP) put on a transition clinic in the first half Monday night, taking advantage of Texas Tech's early turnover problems on its way to an 87-72 victory in the semifinals of CBE Classic. Wesley Matthews scored 20 points and Jerel McNeal matched his career high with 19 for the Golden Eagles, who kept Texas Tech coach Bob Knight at 873 victories. He remained three short of tying Adolph Rupp for second place on the career list and seven shy of breaking Dean Smith's record of 879. “I think our main problem tonight was that we ran into a better team than us,” Knight said. “They showed it from the beginning. They jumped all over us.” Smith attended Monday night's game, one day after Knight watched Smith's induction into the first class of the National Collegiate Basketball Hall of Fame. The Golden Eagles (5-0) forced 18 turnovers, converting them into 27 points, and got 22 points on fast breaks. “That's the kind of game we play,” Matthews said. “We practice it. We drill it. That's when we're at our best, getting a rebound or a turnover and running.” Marquette will face No. 9 Duke in Tuesday night's championship game. The Blue Devils beat Air Force 71-56 in an earlier semifinal. The Red Raiders (4-1) will play the Falcons for third place, also on Tuesday. Dominic James had 16 points and David Cubillan added 11 for Marquette, which got seven assists from McNeal and six from Matthews. Marquette had two long first-half runs and led by as many as 17 points before the break. The Golden Eagles then kept Texas Tech from mounting any serious threats in the second half. After Lazar Hayward's basket with 5½ minutes left gave Marquette its only 20-point lead at 74-54, Benny Valentine hit back-to-back 3-pointers in an 8-0 run that closed the gap to 74-62 with just over four minutes left. But James hit a layup 30 seconds later at the other end, and Marquette never let its lead slip below 11. Valentine led Texas Tech with 17 points, and Jarrius Jackson – the only starter in double figures for the Red Raiders – added 14. The Red Raiders committed 12 turnovers in the first half, with Marquette capitalizing for 21 points. That was two more turnovers than Texas Tech had in its 85-81 victory over North Dakota State on Friday night. “I think we caught them off guard in the beginning,” Matthews said. Marquette's early intensity didn't surprise Knight, though. “I've been in this game a long time. I'm not surprised by anything,” Knight said. “That's what we're all trying to do, start off good.” Marquette raced to an 11-2 lead in just over four minutes and went ahead 26-12 on James' dunk with 8:42 left in the first half. “We started off fast, got the early turnovers,” James said. “We're a hard team to stop when we're getting the ball downcourt and in transition.” Texas Tech answered with an 11-3 run and trailed 29-23 after Darryl Dora scored with 5½ minutes to go, but Dan Fitzgerald answered 10 seconds later with a 3-pointer. Matthews followed that up with a steal and dunk, and the Golden Eagles were off on a 17-8 tear that put them up 46-31 at the half. Fitzgerald, a junior forward, injured his left shin in a collision with just over 11½ minutes left and didn't return. He came back to the sideline late in the game, walking with the help of crutches. The injury was not serious, Marquette coach Tom Crean said. “He's OK,” Crean said. “It's just his shin. He was ready to go back in.”