Marquette, coached by Al McGuire, won the national title with a 67–59 victory in the final game over North Carolina, coached by Dean Smith. Butch Lee of Marquette was named the tournament's Most Outstanding Player. Publicly announcing his retirement during the middle of the season, McGuire retired as head coach immediately after the game. 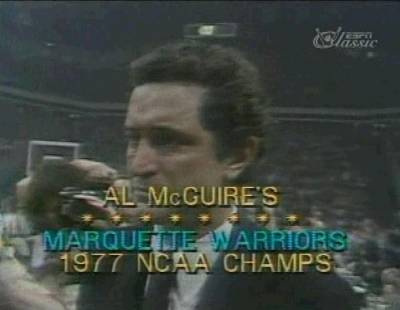 (immediately following the game) “I think they fell apart in the second half. We hung in there.”

(How do you feel?) “Emotionally drained. I'm pleased for the guys. It doesn't seem real. Ya know, you think about something like this, but … I've always been an alley fighter. I don't usually get into the silk lace situations. It seems like it is preordained, but I don't like to use the words of TV announcers, the cliches.”

(In the interview room) “We put in the four corners just yesterday in the hour allotted us for practice. We figured to run it and look for the good shot, keeping the big men underneath. For a while, both teams were playing a chess game. I was not emotional until a five-second count triggered me. I trigger easily. As a coach, you have to be constantly alert. Right now, I feel washed out. Once the avalanche came and we were tied, I tried to stop the avalanche by delays and I called timeouts. Usually we try to do it by contact lens timeouts or something like that. You have to stop the momentum no matter what. At the end of the game, I sat there and thought of all the locker rooms, the dirty jocks, the PALS, and the other things that a New Yorker street fighter knows when growing up.”

(On what it is like playing for McGuire) “It's not bad for the older guys. They know what to expect. For the freshmen, it gets rough. You have to get some good ear plugs.”

“We went into the four corners to get them out of a zone. That's a great zone with 6'9 players- Bo Ellis, Bernard Toone, and Jerome Whitehead in there. (Bruce) Buckley went in for a layup and either Bo or Whitehead blocked it. Then they went into their delay game. They hit all of their free throws down the stretch. Of course, that is what we did to get here.”

“I don't want anybody to quote me as saying that my elbow affected my play out there or cost us the game. But, I feel that I have been useless to the team for the last two games. Anytime that you play for the national championship, that should give you enough to win.”

“I knew that we were going to come back, but I didn't expect it to be that quick. And I knew that once we got the lead, we would go into the four corners and get them to chase us. But Marquette played the four corners smart. they laid back and didn't foul us.”