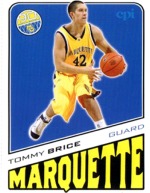 Tommy Led Lake Park to an Upstate Eight title as a sneior. That was Lake Park's first conference title in ten years.

In Brice's second season as a walk-on, he saw action against Savannah State on December 30th and picked up his first career steal against Rutgers on February 7th.