Another intriguing international recruitment for Gran Canaria (with the likes of the first-round draftee Joel Freeland and the Hoop-Summit participant Ryan Richards), Mbao is an extremely raw young big man, but at the same time enjoys the kind of potential that only his great length can provide. Standing over seven feet and coupled with a nice wingspan, the kid displays a skinny body in an average frame. For a guy his size, Mbao is a pretty athletic player, running the court quite well and showing some interesting reactiveness (always considering his young age). He’s a coordinated player who moves on the court with a certain feel for the game; nothing spectacular, but still you can see a serious project of a basketball player.

At this point, Mbao does most of the damage on the defensive end. He fully takes advantage of his length to change many shots, actively contesting either his own opponent’s shots or on defensive rotations. Actually, he shows quite good positioning and mobility on the defensive end, and some interesting timing when he goes for the block, which is not that often. Offensively, he lacks any serious go-to move. He barely shows any type of shooting stroke (his free-throw percentages are awful) and his low post game is still pretty ineffective; not only is he not strong enough to play physical down low, but his footwork looks unpolished and his jump-hook very rusty at this point. On the other hand, he’s a pretty nice passer out of the low post and can eventually put the ball on the floor. Sometimes he lacks some aggressiveness to attack the rim, and as the game advances, he might look a bit passive on court, too static without the ball, not filling spaces quick enough.

A long-term project, extremely raw on the offensive end, very immature on the physical side, still intriguing but extremely unpredictable as far as his eventual development is concerned.

One of the new rising stars from Senegal (along with the Samb brothers, Malick Badiane and Saer Sene who was drafted this year by Sonics), because of his tremendous size and young age (born in 90) he has one of the most promising futures for players from his country. He started to play basketball few years ago and already made part of last years Adidas Superstar Camp in europe, is showing since then a Has a great capacity to learn, playing now in a great team in Spain, Youssoupha is playing in many high level competitions over there. With great size(seems to be still growing), phenomenal wingspan this player really can be a dominant force in the game, excellent defender, great timing for block shots and a rebound machine,on the offense end has a interesting game, very active, decent post up game finishing with hooks shots and jump shots over his opponent, good presence, good attitude trying to touch the ball in every play and dunking the ball every time is possible, decente shot from mid range. excellent leadership and great mentallity for a player so young, loves the challenge and is not afraid to take the responsable of the game in clutch times.Is now playing for Gran Canaria fourth division team playing againsted olders guys. In a few more years will be a sure name for every NBA team.

Still learning the game, needs to understand better how to use his body on the court, become more comfortable wit hthe speed of the game, needs to polish his overall skills, especially his game around the basket, still working on his coordination and fundaments … Also needs to add weight still very weak and suffer because of this against more strongers players who easilly can take him out of position, showed a great evolution since his arrival in Spain (only 6 months) and gained some pounds since then.

Averaged 13.4 points, 11.2 rebounds and 6.0 blocks per game at Stoneridge Prep in Simi Valley, Calif., under head coach Babacar Sy … helped squad to an overall record of 17-13 … squad was nationally ranked in the preseason polls … rated the 125th-best prospect in the nation by HoopScoopOnline.com among 2009 graduates … participated in the 2008 adidas Nations Experience and the National Prep Showcase … named to honorable mention squad of the class of 2009 by NBN Basketball Magazine … ranked as the 30th-best center in the class of 2009 by ESPN.com. 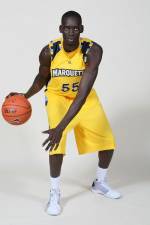 Youssoupha Mbao, a 7-foot-2, 215-pound center signed a letter of intent Monday during his official visit to campus on March 27, 2009. “He's an unbelievable kid,” Williams said. “He speaks four languages, and his spirit is identifiable as soon as you meet him. We've recruited him all year long, and each time we've seen him he's continued to improve. I think he has a very high ceiling. We're excited.”

He was also being recruited by Kentucky, Southern California and Virginia Tech.

Mbao sat out an NCAA-mandated two games to start the season as penalty for a violation of amateurism rules prior to his arrival on campus. But once he was cleared to play it became obvious he was much more of a long-term project than had originally been expected.

It was hoped Mbao would be able to provide some rebounding and shot blocking after coming to the Golden Eagles from Stoneridge Prep in Simi Valley, Calif. His lack of strength, bulk and experience, though, left him on the outside of the rotation despite the Golden Eagles' glaring need for size in the paint.

Played his first collegiate game vs. Grambling State (11/21) and recorded his first collegiate block … Saw 12 minutes of action vs. South Dakota (11/24) … Had one of MU's two blocks and played a career-high 15 minutes vs. Presbyterian (12/27) … Missed a majority of season with knee and wrist injury since … Jan. 17 marked final appearance of campaign … Concluded the year averaging 0.1 points and 0.7 rebounds per game … Earned first letter.

Freshman center Youssoupha Mbao decided to transfer from Marquette University, the school announced on May 17, 2010.

“We want to thank 'Yous' for his contributions to the program last season and wish him the best of luck in the future,” coach Buzz Williams said in a statement. “We are disappointed that he has decided to continue his playing career elsewhere, but will support him through the transition process.”