Each of the impressive accomplishments listed above, as well as numerous others, were recorded during head coach Buzz Williams' first season leading the Marquette University men's basketball program.

The Golden Eagles' performance in 2008-09 mirrored that of a program firmly established in the tenure of a successful head coach, not that of a team under the direction of a first-year mentor.

Williams directed MU to a 25-10 overall record last season, which included a school-record 12 BIG EAST victories. The Golden Eagles advanced to the second round of the NCAA Championship and were ranked among the nation's top-25 teams the entire campaign. A pair of players, Jerel McNeal and Wesley Matthews, claimed all-league accolades and McNeal also claimed All-America honors.

Off the court, Williams and his staff assembled a consensus top-25 recruiting class, a group rated as high as No. 1 in the country by HoopScoopOnline.com. The program's community service efforts have also reached new heights under Williams, highlighted by “Buzz's Bunch.” This group, founded by Williams, focuses on providing opportunities for special needs children to attend games and summer camps. The Golden Eagles have also continued and strengthened their long-standing relationships with Children's Hospital as well as Special Olympics.

In 2007-08, Williams served as an assistant coach with the Golden Eagles in his first season at Marquette. MU concluded the year 25-10 and advanced to the second round of the NCAA Tournament for the first time since 2003.

Legal and NCAA Issues During his Tenure

During his tenure at Marquette, there were a number of issues that made some members of the Marquette community uncomfortable. Those included a one game violation and the dismissing of Scott Monarch due to Monarch lying to investigators about giving a prospect impermissible benefits. Also there was a story in the Chicago Tribune that implicated Marquette and its athletic department in a cover up of sexual assault on campus.

In March 2015, Buzz Williams decided to run away from his poorly constructed team and the legal and NCAA issues above, and took the head coaching job at Virginia Tech; a school with no basketball tradition whatsoever. Buzz never acknowledged that he was showing a lack of the kind of toughness that he preached during his coaching tenure at Marquette, leading many to believe that he was simply a fraud and an opportunist.

Williams arrived in Milwaukee after serving for one season as the head coach at the University of New Orleans. He guided the Privateers to a 14-win campaign in 2006-07 and his roster featured Bo McCalebb, the Sun Belt Conference Player of the Year. UNO claimed fourth place in the Sun Belt's Western Division and advanced to the league tournament quarterfinals. The squad claimed as many victories on the road that season as it had in the previous three seasons combined. His recruiting class for the 2007-08 season was ranked in the top 50 nationally by HoopScoopOnline.com.

Prior to UNO, Williams served as an assistant coach and recruiting coordinator at Texas A&M for two seasons (2004-05/2005-06) under head coach Billy Gillispie. Both of his recruiting classes with the Aggies were ranked among the best in the nation and featured some of the top-ranked talent at the prep level. The squad made its first NCAA Tournament appearance in 25 years in 2005-06 and the previous team posted the top turnaround in the nation, improving its win total in 2004-05 by 14 games compared to 2003-04.

Williams spent four seasons (2000-01 - 2003-04) at Colorado State, serving as an assistant the first three seasons before being promoted to associate head coach in 2003-04. Two of his recruiting classes were ranked among the 40-best in the nation, including the 2003 group, which was tabbed No. 1 in the Western Athletic Conference.

Colorado State made its first NCAA Tournament appearance in 13 years during his tenure and he was named one of the top assistants in the country by HoopScoop Online.

Williams signed the highest-rated recruiting class in the history of the Southland Conference while at Northwestern State. The Demons advanced to their first ever NCAA tournament the following season and two of his recruited players were named All-Conference, while one was tabbed Southland Conference Tournament MVP.

His accomplishments at Texas A&M-Kingsville include signing the 1998-99 Lone Star Conference Freshman of the Year and a third team All-America guard from Panola Junior College.

At Texas-Arlington, Williams recruited a Southland Conference Freshman of the Year and signed the first Academic All-American in the school's history.

Williams was a student assistant coach from 1992-94 at Oklahoma City University where he assisted the team to the 1994 NAIA championship after it advanced to the Sweet 16 the previous season.

Williams served as a student assistant from 1990-92 at Navarro College (Corsicana, Texas) where the team won consecutive conference titles while sporting a 45-17 record during his tenure.

The Van Alstyne, Texas, native earned a bachelor's degree in kinesiology from Oklahoma City University in 1994 before completing his master's work in the same field at Texas A&M-Kingsville in 1999. Williams is married to the former Corey Norman and the couple has one daughter, Zera, and two sons, Calvin and Mason.

“I've admired Buzz Williams' work from a far for some time and have grown to appreciate it even more as I've gotten to know him over the last year,” Crean said. “Adding a person of his character, integrity and talent to our staff means a great deal to me. “I know our players, fans and future recruits will all feel the same way,” Crean added. “Adding Buzz to Bennie Seltzer, Tim Buckley and Brian Barone, gives us a staff I'm really excited to compete with in the Big East and nationally.”
Tom Crean
University of Indiana Men's Basketball Coach


“I am very grateful for the opportunity I was presented at the University of New Orleans,” Williams said. “I am ecstatic about the chance to join coach Crean's staff and I am extremely excited about the future of Marquette basketball.”
Buzz Williams
Marquette University Men's Basketball Coach

Buzz has a way with words. Well, at least he has a way of using words arranged differently than most people. Here's some amusing quotes… 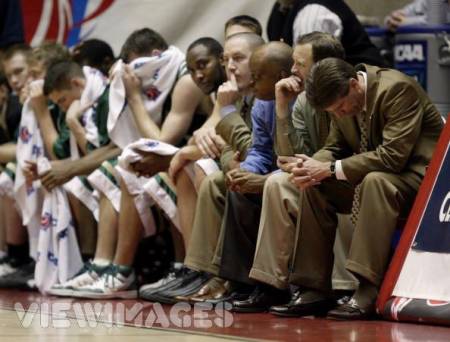 Marquette head coach, Buzz Williams (fourth from the right), was an assistant on the Colorado State Rams basketball team when they lost to Duke, 67-57, in the first round of the NCAAs on March 20, 2003. CSU head coach, Dale Layer (far right, with his head down) was one of Coach Williams' assistants at Marquette in 2008-2009 before leaving for the Head Coach position at Liberty.