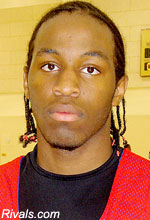 Michael received strong interest from Marquette University under newly named head coach Buzz Williams and has been offered according to Scout.com.

Michael Snaer, a 6-4 junior from Rancho Verde, led the Inland Empire team to an impressive victory over Renardo Sidney and the L.A. Dream team Saturday at the GBOA Hoops tournament at USC.

Snaer, who is being recruited by most of the Pac-10, had 29 points.

Snaer has most of the skills coaches covet in a scoring guard, but what separates him from his peers is his relentless passion to dominate his opponents. Offensively he was in attack mode and for the most part was flawless with his execution, while on the defensive end he smothered opponents with his defensive skills and tenacity.

There were many other intriguing prospects including 6-3 Avery Bradley (Tacoma, Wash./ Bellarmine Prep) and 6-7 Jereme Richmond (Waukegan, Ill), but Snaer was the most consistent throughout the academy.

Player evaluations Michael Snaer (6-5, 185) 2009, Moreno Valley, Calif./ Rancho Verde Snaer had an outstanding spring, and if this event is any indication of where his summer is headed, it's going to be impressive. Snaer was the most dominant, consistent performer at the Paul Pierce Skills Academy. His jump shot was smooth and tight throughout the entire workout, and he was one of the top three defenders in camp – along with Avery Bradley and Durand Scott. Snaer has an incredible motor and desire to be the best at his position. If there is an area of his game that needs polishing, it's his midrange game. He is very good at hitting the spot-up 3 and driving to the basket. However, there were a few opportunities on which he could have came to a jump stop and pulled up at the elbow instead of forcing the drive when the paint was packed. On the other hand, defensively he was a menace; he used his strength and size to smother opponents.

June, 2008: Snaer had a very good camp not to mention an intriguing match up with John Wall the 1st night of competition (2008 Pangos All-American Camp). Snaer is one of the best competitors in the country and he takes on his opponents like it's his last game. However, this approach can sometimes backfire on him%u2014and that's what happened in the 2nd half against John Wall. In the 1st half Snaer allowed the game to come to him and didn't force the issue. He made a number of nice plays off the bounce and his jump shot was fluid. In addition, defensively he forced Wall into an uncharacteristic amount of turnovers and bad shots. However, in the 2nd half Wall took his game to a different level and Snaer tried keep up resulting in bad shot selection and turnovers. Overall, Snaer is a very solid all-around player with a much improved jump shot and as he gains experience he'll understand how to control the flow of game at more efficient rate.

Snaer is emerging as one of the better prospects in an already outstanding sophomore class in the west. He has a strong looking frame, not to mention some nice hops, that allows him to finish inside against taller players. He has an array of offensive skills, including that innate ability to find teammates for open looks. His jump shot is a work-in-progress, but it's consistent enough where you have to honor it. Snaer's strongest trait, however, is his competitive nature; he is one of the few players nowadays who brings intensity at both ends of the floor.