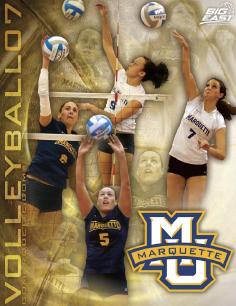 With the second season as amember of the BIG EAST Conference under their belts, the Marquette volleyball team looks to continue its winning ways in 2007. Posting their third consecutive winning season in Division 1 program history, the 2006 squad notched a 16-15 overall record and finished tied for third in the conference with a 10-6mark.

“It’s been an interesting three months prior to the season,” head coach Pati Rolf explained. “We’ve had some things happen to us, but that’s part of being in a family, a university or an athletic team. I think the biggest challenge is overcoming adversity and that is what we are doing.”

The Golden Eagles have lost some starters from last year’s squad, but Coach Rolf is not worried about that and is looking towards the future.

This year’s team consists of 13 student-athletes. The four seniors, Katie Weidner, Kimberley Todd, Jenn Brown, and Tiffany Helmbrecht will be looked to for leadership, a responsibility that they are ready for.

“They have alwayswanted to lead,” Rolf said about her seniors. “That has probably been their biggest fault because they thought theywere leaders when they weren’t. But now they are leaders and they’ve had a lot of practice. They’ve always wanted to lead this group, and are all born to be in charge of something, whether it be a business, a teamor a family. “

Despite the desire to be in charge, the four seniors will face challenges with so many newcomers to the squad.

“I think the four of themare going to be challenged by the season and trying to keep the young ones positive and focused, especially the oneswho don’t have any experience,” Rolf said. “They will also help to keep everyone seriousbecausewecanbesilly sometimes.”

Though the loss of All-BIG EAST First Team member Jamie Mueller and other starters from 2006 will leave a void, MU will still have a player with conference recognition in All-BIG EAST First Team member Kimberley Todd. Senior setter Katie Weidner returns after a 2006 injury forced an early end to her season and newcomers Ashlee Fisher and Rabbecka Gonyo willmake an immediate impact on this year’s team.

“We’re going to have a lot of new people playing, which is going to be exciting for them,” explained Coach Rolf. “Where there is loss there is opportunity for others. There are opportunities being given to others who potentially may not have been playing.” 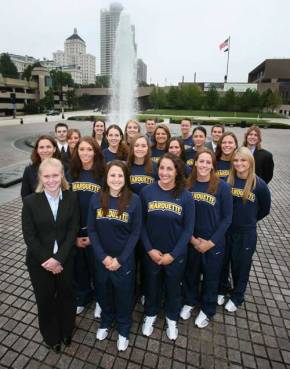 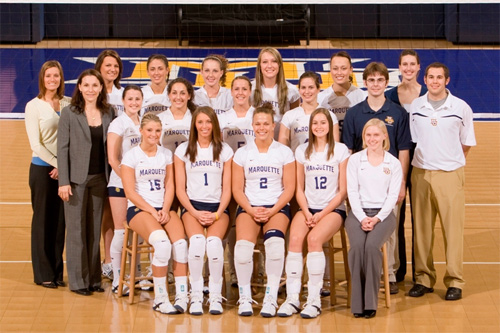