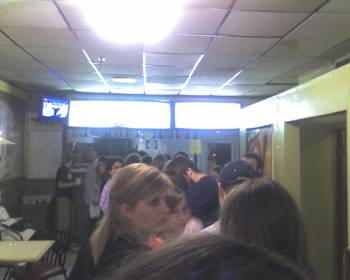 
It does not do this beautiful restaurant justice to say that Marquette Gyros (often referred to as just “Gyros”) serves the best food on Marquette's campus.

The options in the area are as follows: Subway, George Webb, Jimmy John's, Papa John's, the nascent Dogg Haus, the hot dog vendor on Wisconsin Avenue near Raynor, and whatever restaurant currently occupies the spot next to Starbucks on Wisconsin and 17th. Needless to say, the competition, whittled even further at 2am, isn't exactly fierce. If it was, though, Gyros would still dominate like Kobe in a Rec Center pickup game.

The fact that this restaurant does not yet have a national profile is heartbreaking. Seemingly unbeknownst to even its proprietors, Marquette Gyros delivers burgers, steak sandwiches, patty melts, and chicken bacon swiss sandwiches that can only be classified as the tastiest options in the city of Milwaukee, and perhaps the best greasy food north of the Mason-Dixon line.

Make no mistake about it, Marquette Gyros won't show up in any Zagat guides, nor will it win any Michelin stars. Were it on an interstate highway, it probably wouldn't get a single diamond from the AAA. Let's face it – Gyros probably wouldn't pass a local health inspection. Its bathrooms are truly atrocious. Cash is the only currency accepted on a regular basis. Its cooks, probably best described as surly bastards, are the type that will take a long pull from their Coronas in between flipping the patties of the world's best double bacon cheeseburger. But therein lies the beauty of Gyros – it's the world's best double bacon cheeseburger.

The glory of this burger cannot be put into words, but I'll try. Start with a perfect, oversized bun. Add bacon with just the right texture, two sizzling patties, American cheese, and a swath of ketchup. It sounds simple to duplicate, but this combination is impossible to replicate.

Most popular after nearby establishments such as Murphy's, Caffrey's, and Angelo's close their doors, lines for the tastiest of the eatery's delicacies can reach 30 minutes in length. The reward, however, far outweighs the punishment of struggling to stay awake in such a brutal line. Just try going back to Mickey D's after you've tasted a midnight snack from Gyros.

Eating here can certainly be an experience, after making it back to campus in the first place, navigating through the lines, and arguing with fellow patrons. However, your satisfaction is virtually guaranteed. If you don't like Gyros, you probably don't like food.