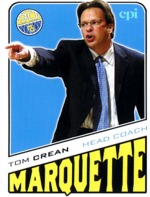 Tom Crean coached Marquette from 1999-2008. Crean was credited for bringing Dwyane Wade to Marquette, who brought the team to a Final Four appearance in 2003.

Crean signed a contract in 2006 that made him one of the highest-paid coaches in college basketball at $1.6m/year for 10 years.

On April 1st, 2008, word leaked that Crean had taken the head coaching job at Indiana University at a salary of $2.3m/year.

Shortly after the announcement that he had taken the job, word surfaced that he had not informed the president of the Marquette University, Fr. Robert Wild until nearly 7 hours after the report of his hiring…he called Fr. Wild at midnight to discuss the matter. In addition, his players heard the news not from the coach that brought them to Milwaukee, but from ESPN.

In the days after his departure, he pursued several Marquette recruits, including Nick Williams, who had signed a letter of intent with MU and Erik Williams, who rebuffed Crean's advances and re-affirmed his verbal commitment to the Warriors.

A blog entry on the Milwaukee Journal-Sentinel website indicated how unhappy Father Wild was with the way Crean abandoned his players and the university that had been so good to him and his family.

On March 30, 1999, Crean was named head coach at Marquette University, beating out a number of candidates, including Duke University assistant coach Quin Snyder, Butler University head coach Barry Collier, and former University of Iowa coach Tom Davis. Marquette had been looking for a young coach and a successful recruiter from a successful program after firing Mike Deane on March 5. The Rev. Robert A. Wild, Marquette president, said Crean possessed everything the university was looking for, including “great recruiting ability, knowledge of the Midwest, successful coaching experience, a tremendous work ethic.” No players decided to transfer as a result of the coaching change. According to Crean, “Once Marquette became available, that's where my sights were. I had unbelievable respect for the tradition and the name. When I thought of Marquette, I thought of a true basketball school and to me that had a lot to do with it.”

Crean immediately made a number of changes at Marquette, creating a new team image by increasing the significance of the team's media day and instituting a “Midnight Madness” event commonly held by schools on the night teams are allowed to begin practice. Crean's first recruiting class was considered by experts to be among the top twenty in the country, Marquette's first in a long time.

Crean was hired by then head coach Jud Heathcote as a graduate assistant coach at Michigan State University during the 1989-1990 season, at the behest of then assistant coach Tom Izzo, whom Crean had befriended on the summer camp circuit.[5] He was also a scout for two years, earning the trust of recruiting guru Bob Gibbons. That season the Spartans won the Big Ten title and advanced to the Sweet 16 in the NCAA tournament.

Crean spent the next four seasons as an assistant coach under Ralph Willard at Western Kentucky University. In 1993, Western Kentucky beat Penny Hardaway and Memphis and then upset second-seeded Seton Hall to advance to the NCAA Sweet 16. Western Kentucky then lost to Florida State in overtime. When Willard left to become head coach at the University of Pittsburgh in 1994, Crean was considered for the position of Willard's replacement before the selection of Jacksonville University head coach Matt Kilcullen.

Crean followed Willard to Pittsburgh, serving as associate head coach for one year. While at Pittsburgh, Crean interviewed for the head coaching position at Murray State University, a job that went to UCLA assistant coach Mark Gottfried. 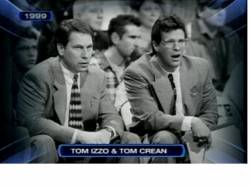 In 1995 Crean rejoined Izzo, who had been named head coach at Michigan State. The two became such good friends that Crean lived in Izzo's house and Izzo was an usher in Crean's wedding. According to Crean at the time, “It was a great opportunity for me to go back home. We've been friends a long time. I don't think I would have left Ralph for anything else.” Crean served as recruiting coordinator at Michigan State, and was the leader behind a shift in the recruitment of Michigan players to Michigan State instead of the University of Michigan. He directed the staff's preparation for opponents, and wrote reports identifying several aspects on each of the opponent's players. He also handled the substitutions, called many of the plays, and formulated a play sheet that used a lot of pro sets on offense. While Crean was at Michigan State, the Spartans compiled an 88-41 record.

A number of Crean's assistants have become head coaches elsewhere.

Crean grew up in Mount Pleasant, Michigan, where he played basketball for four years. According to Crean, “I didn't play a lot, but I knew I wanted to coach.” While a student at Central Michigan University, Crean was an assistant coach at Mount Pleasant High School for five seasons, and at Alma College. Crean received his bachelor's degree in parks and recreation from Central Michigan in 1989.

Crean is married to Joani Harbaugh, who he met through a mutual friend at a gym where she was working as an aerobics instructor. Harbaugh is the daughter of former Western Michigan University head football coach Jack Harbaugh and sister of former University of Michigan and NFL quarterback Jim Harbaugh. Crean's brother-in-law, John Harbaugh, is the head football coach of the Baltimore Ravens. Crean and his wife have three children, Megan, Riley, and Ainsley.