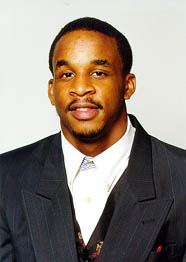 Hutchins was coached by Bob Seggerson and was a three-year starter at Catholic Central, leading his team to a 75-5 record during that span. Central Catholic advanced to the state tournament in each of those three seasons and lost in the state semi-finals during Hutchins' sophomore and junior seasons. They advanced to the state championship game in his senior year. Central Catholic was ranked Ohio's to Division III team during the 1992-93 and 1993-94 seasons.

Aaron was named Ohio's Mr. Basketball in 1994, the first Division III player to receive that honor, as he averaged 25.3 points, 7.1 assists and 3.5 rebounds as a senior. He was also the MVP at the 1993 Five Star Camp.

A starter in all 30 games … Has reached double figures a team-best 25 times … Has three double-figure scoring-assist games … The team's leading scorer on eight occasions … Has made a three-pointer in 26 games … Scored a season-high 26 points, including 21 in the second half, versus Saint Louis (Jan. 18) … Grabbed a season-best eight rebounds in season-opening win over UW-Milwaukee (Nov. 24) … Tied his career high with 12 assists against DePaul (Jan. 9) and Appalachian State (Dec. 19) … Registered seven steals, most ever by a Marquette player at the Bradley Center, against both Appalachian State (Dec. 19) and UW-Milwaukee (Nov. 24) … Was named to the First Bank Classic All-Tournament Team (Dec. 6-7) for the second straight season after averaging 14.5 points, 6.5 assists and 4.5 rebounds against Prairie View A&M and Princeton … Turned in a school-record 5-5 effort from three-point range against Prairie View A&M (Dec. 6) … Named the Phillips 66 Conference USA Championship MVP after averaging 14.5 points and 3.5 assists and shooting 50.0% from three-point range and 84.2% from the free throw line … Scored 16 points in C-USA Championship win over UNC Charlotte (March 8) registered the 1,000th point of his career in that victory.

Received honorable mention on the Basketball Times All-Midwest team … Also earned All-Conference USA Honorable Mention … A starter in 30 games … Made a three-pointer in 30 of 31 games … Ranked 10th in the country, and first in the nation's sophomore class, with a 6.9 assists average … That assist average was tops among Conference USA players … Became the third player in school history to surpass the 200-assist mark in a single season with 215 … Was 27th among Division I players with a 84.9% free throw percentage … Marquette's leading scorer on 10 occasions … Also led Marquette in rebounding twice … Had 25 double-figure scoring games, most on the team … His 71 three-pointers were the third most in school history … Attempted 192 treys, second most in school history … The Chevrolet Player of the Game against Arkansas (3/16), Monmouth (3/14) and Cincinnati (3/9) … Scored 20 points against Arkansas in the second round of the NCAA Tournament … Made four three-pointers in that game, tying a school record in NCAA Tournament contests … Scored team-high 17 points to go along with six assists against Monmouth (3/14) in NCAA first-round action … Named to the Conference USA All-Tournament Team … Notched a career-high 29 points as well as six assists and three steals in loss to Cincinnati (3/9) … Had 11 assists against South Florida (3/7) … Scored 11 points and dished out 11 assists in upset of Cincinnati (3/2) … Exploded for 23 points in upset of Louisville (2/28) … Had 16 first-half points and made six three-pointers, including the game winner with three seconds left in double overtime against UL … Dished out a career-high 12 assists and scored nine points at DePaul (1/17) … Registered his first double-figure assist game with 11 against Saint Louis (1/7) … Scored 10 points in that game as well … Notched 22 points against Vermont (12/22) … Was 8-12 from the field, including 6-9 from three point range in that game, which was played on his 20th birthday … Nearly missed a triple-double with 14 points, a career-high 12 rebounds and nine assists in upset of Santa Clara (12/16) … The MVP of the First Bank Classic … Tied for team leadership with 15 points versus UW-Green Bay (12/2) … Also had nine assists and four steals in that game … Made the first start of his career against UW-Milwaukee (11/26) and responded with 12 points, six rebounds and eight assists.

Came off the bench in all 33 games … Named to the NIT All-Tournament Team … Averaged 17.2 points and shot 53.6% from three-point range in Marquette's five NIT games … Finished the season with six consecutive double-figure scoring games … Tied for team leadership with 15 points in NIT championship loss to Virginia Tech (3/29) … Tied his season high with five rebounds in that game … Scored a season-high 21 points in NIT semifinal victory over Penn State (3/27) … Led Marquette with a game-high 18 points in NIT quarterfinal win over South Florida (3/22) … Registered 12 points against St. Bonaventure (3/20) in the NIT quarterfinals … Scored 20 points off the bench against Auburn (3/15) in the first round of the National Invitation Tournament … Was 7-9 from the field, including 5-7 from three-point range, in that game … Was a spark off the bench against Saint Louis (3/10), scoring 13 points and accounting for two assists and two steals … Had nine points at Saint Louis (1/22) … Had seven points and a season-high five rebounds in loss to Virginia Tech (1/7) … Handed out five assists in victory over UAB on Jan. 15 … Scored six points and had three rebounds and three assists versus Cincinnati (1/12) … Had two points, four rebounds and four assists against UW-Green Bay (1/7) … Scored nine points, including a 6-6 performance from the free-throw line, against Wisconsin (12/31) … Had five assists and three steals versus Creighton (12/23) … Recorded 10 points on 4-6 shooting at San Francisco (12/10) … Had five assists against Fairleigh Dickinson (12/6) … Handed out seven assists in 15 minutes against UW-Milwaukee … Scored seven points in victory at Ohio State (11/30).

Youngest of Vivian Hutchins' three sons … A computer science major…Cousin Greg Simpson was the Big-10 Freshman of the Year at Ohio State in 1993, and also played for West Virginia…Cousin Clay Tucker played for UW-Milwaukee from 1998-2003 and is currently in the NBADL.