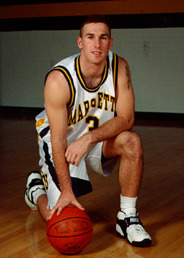 Wisconsin's all-time leading prep scorer with 3,391 points Pieper set a single-season record in 1992-93 with 1,063 points and scored 30 or more points 66 times in his prep career. Pieper averaged 38.4 points a game as a senior, leading Wausaukee to the 1993 state Division 4 state crown. Pieper also scored a career-high 59 points in the regional championship game as a senior, while averaging 6.9 assists and shooting 52% from the field and 78.7% from the free throw line. Anthony also played in the Wisconsin Basketball Coaches Association Division 3/4 All-Star game and was a finalist for the Outstanding Wisconsin amateur athlete, as awarded by the Milwaukee Athletic Club. Coached by his father, Gene Pieper and also Led Tirabassi Construction of Kenosha to the gold medal in the 1993 Badger State Games.

Had numerous high-scoring games while a prepster: 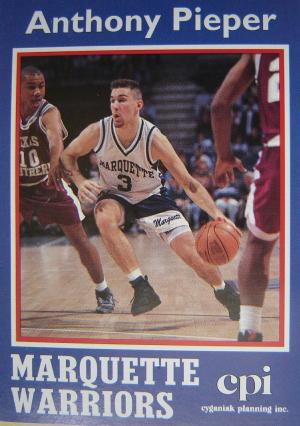 Anthony was named team captain and played in and started in 24 games … Missed the UNC Charlotte game (March 8) after re-dislocating his left shoulder in the first minute of the March 7 upset of Cincinnati … Has reached double figures in 16 games, including seven of the last nine … Has hit a three-pointer in 18 games … Averaging 16.6 points in the last seven games … Shooting 52.9% (27-51) from the field and 51.6% (16-31) from three-point range in the last five games … Missed the Maine game (Feb. 5) after re-dislocating his left shoulder at South Florida (Jan. 30) … Originally dislocated that shoulder against La Salle (Dec. 22) and missed the next three games against Dayton, Wisconsin and Southern Miss … Scored a season-high 24 points at UAB (Feb. 17) … Tied a school record by going 11-11 from the free throw line in that game … The 24 points was his best scoring performance in the previous 44 games … Grabbed a season-best six rebounds against Appalachian State (Dec. 19) … Was 5-5 from three-point range, tying school and Bradley Center records for proficiency, against Cincinnati (Feb. 27) … The five three-pointers were his season high.

A starter in 28 games … Made 62 three-pointers, seventh best in a single season at Marquette… Attempted 162 three-pointers, sixth highest at Marquette … Ranked fourth in Conference USA with an 83.1% free throw percentage … Was seventh among Conference USA players with a 38.3% three-point percentage … Reached double figures in points 17 times, including a season-high 30 points against Morgan State (1/2) … Set a Bradley Center record with seven three pointers in that game … Was Marquette's leading scorer in eight games … Had 13 points, four assists and four rebounds against Arkansas (3/16) in the second round of the NCAA Tournament … Scored 10 points and grabbed five rebounds against Monmouth (3/14) in the NCAA Tournament first round … Chosen to the Conference USA All-Tournament Team … Scored 13 points against Cincinnati in the Conference USA Championship (3/9) … Exploded for 23 points on 9-11 shooting against Memphis (3/8) … Led Marquette for the second straight game with 21 points against South Florida (2/7) … Was 5-9 from three-point range and had four assists in that win … Returned to the starting lineup at Tulane (2/4) and led MU with 18 points … Came off the bench to score six points and grab three rebounds versus UAB (1/30) … Played just 2:36 before leaving with a strained hip flexor at UNC Charlotte (1/25) … Led Marquette with 19 points and was 5-6 from three-point range in win over DePaul (1/17) … Tied for team honors with 16 points at Cincinnati (1/13) … Was 10-11 from the free throw line and played all 40 minutes in that game … Missed the Dec. 2 game against UW-Green Bay with a sprained right knee … Was held scoreless before leaving the Dec. 1 game versus Columbia with a sprained knee.

Played on a People-to-People All Star team with Roney Eford that toured Holland and Belgium in the summer of 1995 … The team was coached by Mike Deane.

Appeared in all 33 contests … A starter in 31 of those games … Marquette's leading scorer in 10 games … Reached double figures in 25 games, most on the MU team … Made a three-pointer in 29 of 33 contests … Led Marquette with 73 three-pointers and in free-throw percentage (74.1%) … His 73 three-pointers are the second most in a single season at Marquette … Was second on the team with a 13.1 scoring average … He ranked sixth in scoring and 10th in scoring among Great Midwest Conference players … Had nine points, six rebounds and three steals against Virginia Tech (3/29) in the NIT championship contest … Scored 32 points, most ever by a Marquette player in the NIT, in semifinal win over Penn State (3/27) … Those 32 points were the most on the season … Also set school NIT records going as 7-9 from three-point range in that game … Held to one point, his lowest output in 17 contests, versus South Florida (3/22) … Led all scorers with 24 points and had a career-high nine rebounds in NIT win over St. Bonaventure (3/20) … Was 10-16 from the free-throw line in that game, both are single-game NIT records … Had 12 points and four rebounds in NIT victory at Auburn (3/15) … Scored just three points before fouling out versus Saint Louis (3/10) in the Great Midwest Conference Championship semifinals … Came off the bench to score eight points and grab five defensive rebounds against UAB in the Great Midwest quarterfinals (3/9) … Tied for team honors with 19 points in win over Memphis (3/4) … Was 5-9 from three-point range in that game … Scored 11 points and grabbed five rebounds against Notre Dame (2/25) … Scored 16 points in double-overtime loss at Memphis (2/18) … Attempted 15 three-pointers in that game, most by a Marquette player on the season … Held to seven points at UAB (2/16) … Scored 20 points on 5-10 shooting, including 4-9 from three-point range, at West Virginia (2/11) … Led Marquette with 12 points versus Saint Louis (2/9) … Scored a team-high 16 points in loss at DePaul (1/28) … Played a season-low 12 minutes and had one rebound against Virginia Tech (1/17) … Had a team-high 13 points in loss to Cincinnati (1/12) … Scored team-high 12 points versus Temple (1/5) with four three-pointers in the first half … Had 13 points and seven rebounds in win over Wisconsin (12/31) … Scored 18 points and dished out five assists at San Francisco (12/10) … Had 19 points in win over Fairleigh Dickinson (12/6) … Was 5-6 from three-point range in that game, tying a Bradley Center record … A member of the First Bank Classic All-Tournament Team … Tied for team honors with 16 points in win over Northwestern (12/3) … Led Marquette with a career-high 22 points against Ohio State (11/30) … Scored 19 points against UNLV (11/28).

Appeared in all 32 games, starting in two … Saw the most playing time among the freshman class … Was the first guard off the bench for Marquette … Averaged 4.9 points and 0.9 rebounds a contest … Had four double-figure scoring games on the season … Played 20 or more minutes eight times … His longest outing was 33 minutes versus East Tennessee State, his first collegiate start … Scored 16 points in that game … Tallied seven points against Cincinnati (3/11) in the Great Midwest Tournament … Totaled 13 points against Dayton (2/20) … Scored 10 first-half points at DePaul (1/12) … Grabbed a season-high five rebounds at Wisconsin (1/ 2) … Dished out four assists twice - versus South Florida (1/31) and at Wisconsin (1/2).

Son of Gene and Sue Pieper. His father played football and basketball at UW-Oshkosh. His older brother, Phil, played basketball at UW-Oshkosh and his sister, Anne, was a three-year starting point guard at UW-Milwaukee. An all-state wide receiver during his senior season at Wausaukee and a four-year letterwinner in baseball. Majored in communication. He is married to the former Chaitra Hyatt, lives in Noblesville, IN and is employed by Mueller Sports Medicine as regional sales manager.