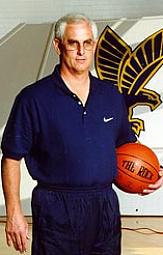 Deane was named the 14th coach in Marquette history on April 1, 1994. Bill Cords, Marquette's Director of Intercollegiate Athletics and Recreational Sports remarked, “Coach Deane has many outstanding qualities as a person, a coach and a recruiter. I look forward to what he will do with the Marquette program.”

Deane got off to a fast start at Marquette, leading the Golden Eagles to six straight wins, the only coach in school history to win the first six games of his tenure. He joined Eddie Hickey (1958-59) and Hank Raymonds (1977-78) as the only Marquette coaches to record 20-win seasons in their inaugural campaigns after the 1994-95 Golden Eagles posted a 21-12 slate.

Deane is the sixth coach to take his first Marquette team to postseason play. Also, he and Tex Winter (1951-52) are the only coaches to record three postseason wins in their first season at Marquette. MU was the 1995 National Invitation Tournament (NIT) runner-up.

The Stony Point, N.Y. native has experienced success throughout his coaching career. Deane's 12-year career record at four-year institutions is 234-122 for a winning percentage of 65.7%. That winning percentage ranks 43rd among NCAA Division I active coaches. His 16-year coaching record is 303-158 (65.7%).

Deane, 44, came to Marquette from Siena College in Loudonville, N.Y. In eight seasons at the helm of the Saints, Deane compiled a 166-77 (68.3%) record. Deane's total wins and winning percentage are the best among Siena's Division I coaches. Siena moved to Division I status in 1977.

Four of Deane's teams competed in post-season action, including the 1993-94 squad that compiled a 25-8 record and finished third at the National Invitation Tournament (NIT).

The 1987-88 Siena team participated in the NIT, the school's first-ever Division I postseason tournament appearance. The Saints also played in the 1991 NIT.

At the 1989 NCAA Tournament, Siena, the 14th seed in the East Regional, upset #3 seed Stanford 80-78. That was Siena's first appearance in the NCAA Tournament.

Prior to his stint at Siena, Deane was an assistant coach at Michigan State from 1982-86. He served as interim head coach prior to the start of the 1984-85 season when head coach Jud Heathcote was recovering from heart surgery. During Deane's stay at MSU, the Spartans were 74-44 and appeared in the NCAA Tournament twice and the NIT once. Deane was instrumental in the development of future professional players Scott Skiles and Sam Vincent.

A three-year letterwinner at Potsdam State, Deane was a Small College All-American in 1973 and 1974. At the conclusion of his collegiate career Deane was Potsdam's career scoring (1,447 points) and assists (805) leader. He also established the following school records: highest career scoring average (18.0 ppg); most points in a game (42); and most assists in a game (23).

The Bears were 64-16 during Deane's career. Potsdam participated in the NCAA Division III Tournament in 1974, Deane's senior season. He was a three-time East Coast Athletic Conference All-East honoree (1972, 73, 74).

He also played second base for the Bears' baseball team for three years.

Deane was a ninth-round selection of the Milwaukee Bucks in 1974. He also was signed by the Utah Stars of the ABA.

He received an economics degree from Potsdam State in 1974. Deane received the 1974 John W. Maxy Award, which recognizes the top senior student-athlete at Potsdam State. He was named the Chancellor Boyer SUNY Scholar-Athlete of the Year in 1974.

Coach Deane and his wife Paula have been married for 27 years and the couple lives in Staten Island.