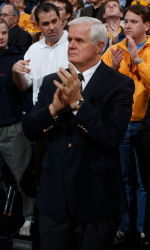 In 1982, he became the athletics director at the UTEP. During that five-year tenure, a strong broad-based program was developed with a rapidly improving football program, development of a women's athletic conference, a very successful men?s basketball pro-gram, and highlighted by the elimination of a previous$1 million deficit.

The mission of the Department of Intercollegiate Athletics is to strive for excellence in academics, athletics, leadership and service to others. Marquette student-athletes, teams and coaches across the broad-spectrum of the program continue to achieve academic, athletic, personal and professional prominence at the conference, regional and national levels.

“We are very proud of our students and coaches.They take great pride in representing Marquette and dose striving to be the very best they can be as people,students and athletes,” remarked Cords.

Beginning July 1, 1993, he assumed responsibility as director of the Department of Intercollegiate Athletics and Recreational Sports which combined the activities of intercollegiate athletics, intramurals, club sports and open recreation. This allowed the department to provide more services to the community, in particular the inauguration of the summertime National Youth Sports Program (NYSP) designed to benefit underprivileged youth in the Milwaukee area, while encouraging community use of Marquette facilities such as the Valley Fields Complex, Rec Plex, Helfaer Tennis Stadium, Helfaer Recreation Center and Marquette Gym.

Cords was honored nationally by his peers as the 1999 NACDA/Continental Regional (Central) I-AA/I-AAA Athletic Director of the Year. “This award is not about one individual,” said Cords. “It is a recognition, at the national level, of the support,hard work and dedication of students, coaches, staff,fans and administration over the past 12 years.” “It is an individual honor, but more importantly it is a very positive recognition of Marquette University and all of the people who have and continue to make our program better and stronger.”