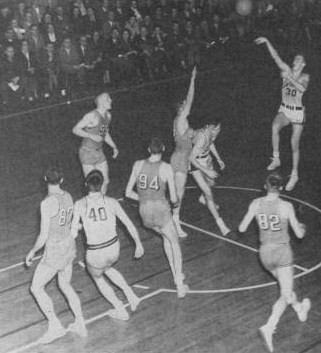 The long looks back over any season are hard to make. A man's memory won't always jibe with the cold figures in the statistics, for there's more to a season than the balance, or the lac of it, on the win and loss scales. But just what that “more” is and how to evaluate it so that we get a true picture or at least one on which the majority will agree…well, maybe our guess is no better than most, but this is the way we see it.

It came near to being Marquette's most disasterous season to date. The team set low marks (since 1948-49) in points per game (55.3), field goal percentage (28.9%), free throws made (312), rebounds (821) and assists (192), but it had it's moments of genuine brilliance, it's stretches of hard and satisfying play and it's flast of desperate and hopelessly inept action. It was typical Marquette basketball.

Coach Bill Chandler began his 21st year as basketball coach on the Hilltop and with this year, he ended his coaching days here. What pride he can take in his final season's record we are now trying to determine, but only he will ever really know. The record can't tell us that either. All it will say is this-

Except for two outstanding veterans, Gene Schramka and Russell Geldmacher, Chandler's hopes settled on seven sophomores- Grant Wittberger, Glenn Sievers, Peter Basarich, Cedric Barnett, John Powers, Richard Schwab and Donald Marek. As it turned out, the play of Barnette and Powers fell off toward the middle of the season, while that of Basarich and Marek took and upswing. Meanwhile, Art Felker developed into an adequate second for Wittberger at center and the nine “iron men” became ten.

It would be useless to speculate about the quality of the other men on the bench, because they rarely played for more than 30 seconds at a time. Although the Hilltoppers were favored over the Green Knights of Saint Norbert's, they were upset by a score of 61-53. Cedric Barnett took some of the edge of gloom from the evening by dropping eight field goals through the hoop from various spots on the floor.

Two days later, 6'7“ Grant Wittberger led the way to a 64-54 victory over Ripon's Redmen, by scoring 15 points. UW-Madison handed Marquette a beating hard to take. It was a low scoring, well-fought game, in which the final quarter found the “iron men” ironed out. Wittberger kept his position as high man of the evening with 15 points to his credit. The debit was the short end of a 49-42 total. Against Illinois, Marquette was hopelessly outclassed. the final tab read 66-47. 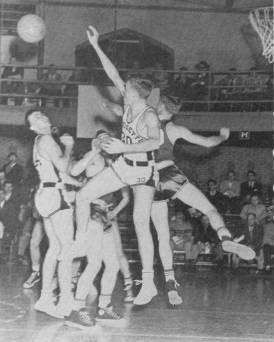 Ohio State gave the Hilltoppers a 76-55 lacing, by using the platoon system to keep the men on the floor reasonably fresh. It seemed like a good way to win a ball game. The Wolverines scout must have thought so too, for Marquette lost at Ann Arbor for much the same reason- no depth. The score was a more respectable 40-37.

With a single win against a seven-loss start, the opening of Milwaukee's new Arena was eagerly anticipated. The Arena turned out to be a fine place to watch basketball, and for the Badgers to take a beating. The “iron men” held and from a 23-23 halftime stalemate, worked their way up to a 61-58 victory. Forward Gene Schramka starred by netting 16 points, while Glenn Sievers tallied 11 and Wittberger finished with nine.

The beautiful ballhandling of John Powers made most of it possible, but for all of that, Marquette couldn't overshadow UW-Madison's Ab Nicholas, who dominated the evening with 21 points and a superb performance. Over the Christmas holidays, the Hilltoppers dropped a game to Michigan State at East Lansing and bowed to Detroit's Titans the next night 64-51.

At the Arena again, Northwestern's Wildcats clawed their way to an 81-69 slaughter. Wittberger scored 15 points once again, but stayed second to the Wildcats' Jake Fendley, who tossed in 18. That put the cap on 1950, but we were still wearing a smile from beating back the Badgers.

Marquette started the new year off right with an upset over the Detroit five. The Titans were ranking high in the pre-season ratings and the Hilltop fans saw why in the first half, as Brendan MacNamara pumped in set shots from beyond the circle, while Norm Swanson hit from the pivot. However, Marquette was far from out of the game at any point, but the Titans did get the best of the battle in the first half. The second half was a carbon copy of the first, but this time the Hilltoppers had the upper hand.

Peter Basarich, who entered the game mid-way through the first period, put on a terrific shooting exhibition with his jump shots from the circle. Grant Wittberger was outstanding under the boards and his fadeaway shot broke a 62-62 tie with only two minutes to go. Donald Marek iced the game with a charity toss and the Hilltoppers won, 65-62.

The Motor City sent it's second college crew to Milwaukee on Saturday, January 13th. The Hilltoppers proved they could beat the best Detroit had to offer, as they downed the Wayne five. Marquette's two-game victory skein proved too much for the sophomores, as the Falcons of Bowling Green edged the locals, 72-66. The blue and gold led until the waning minutes of the game, but the Ohioans put together a barrage of baskets and the Hilltoppers dropped another road contest.

The jinx stayed with the local quintet the following night, as they bowed to the Golden Flashes of Kent State. Once again, Marqutte led until Kent State got their second wind and finished the game 56-50. The cagers took a two-week break for semester exams, before they traveled to South Bend. The Irish quintet had a habit of winning games on their home court and Marquette did not change their ways, as they came up on the short side of an 82-56 contest. Peter Basarich canned 19 points, but this was the only bright spot of an otherwise dull picture.

Marquette broked the road game jinx on February 5th, with a 50-45 win over Wayne State in Detroit's Olymphia. The game was close all the way, as the Tarters had new life with the play of John Kline, their newly-eligible sophomore. The speedy forward dropped in 15 points, but the well-balanced Marquette attack spelled the difference.

Purdue invaded the Milwaukee Arena on February 10th and the sharp-shooting Boilermakers hit from all angles, to trounce the locals, 76-58. Neil Schmidt canned 20 points and Carl McNulty hit for 17 to pace the boys from Indiana, while Grant Wittberger hit 19 for Marquette. Another week went by before the blue and gold departed on their final road trip of the season.

Loyola's Ramblers, paced by the play of Nick Kladis and Don Hanrahan, edged the Marquette five, 67-61. Creighton provided the opposition for one of the most exciting games of the year. The contest was close all the way, with neither team leading by more than five points. The score was tied at 55 with only a few seconds left. Glenn Sievers let go with a long, one-hander as the gun sounded. The ball hit high and then dropped through the hoop.

Marquette came home to wind up the season. Loyola beat the Hilltop 55-54 on February 23rd, behind the shooting of Nick Kladis. The fans watched MU fight back time and time again, but the Ramblers had a little too much. Bowling Green was the next team to invade the Clybourn St. gym. The speedy Falcon guards kept the Hilltop defense alert all night long and Jim Gerber and Eli Joyce gave the Marquette give trouble under the baskets.

Grant Wittberger out-scored Gerber 20-12, but it was Peter Basarich who provided the punch. The slim forward entered the game and mid-way in the first half and dropped in 16 points before the final gun as MU won, 60-56. The final game with Notre Dame topped off the season, with the Hilltopers beating the Irish, 55-50.

Though Russell Geldmacher, who played regularly, steadied the team, it was the second-year men who provided the zest to beat the Irish. Basarich showed the Notre Dame quintet the art of sinking a two-handed set shot and Richard Schwab was aggressive under the boards, also adding 15 points. Notre Dame's Dan Bagley was impressive, as he canned 23 points, but the rest of the Irish couldn't hit the hoop.

Russell Geldmacher was elected team captain by his teammates at the annual cager's banquet and if Uncle Sam doesn't pull too many of the players, MU should have the makings of a fine team for the 1951-52 season. 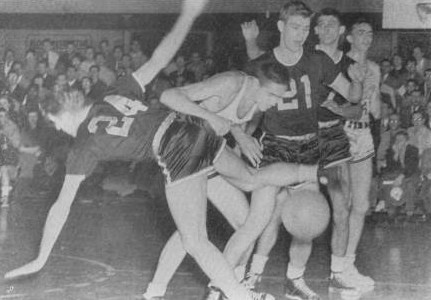 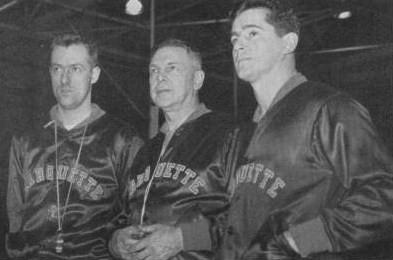 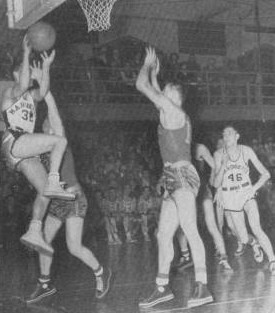