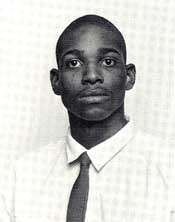 Luter's high school teams won 79 games and two WISAA Class B championships in 1985 and 1986. He finished as the school's all-time leading scorer (1,448 points) and rebounder (831 rebounds). As a senior for Gerald “Paul” Bertolus, Luter averaged 23.1 points, 9.5 rebounds and 2.6 assists, hitting on 54% from the field and 72% from the foul line. He led the Midwest Classic Conference in scoring that season.

Luter played in 27 games as a freshman, starting two contests and averaging more than 12 minutes per game. He Averaged 5.1 points per game and scored in double figures against Northwestern (13), Kansas State (15), Loyola Marymount (20), Dayton (10), Wake Forest (14), and 10 versus Creighton. Luter was second on the team in free-throw percentage (.787), hitting on 37 of 47 attempts. His career rebounding high was six boards against Wake Forest. Charles was also sixth on the team in assists (30) and steals (15) and second in blocked shots (19).

Luter played in 15 games, after coming back from knee surgery to repair the posterior cruciate and posterior capsule tear he suffered in October. He scored seven points against Notre Dame in a season-high 18 minutes, hitting on three of four field goal attempts and pulling down four rebounds. He also played double-figure minutes against Evansville in the MCC Tournament.

Coach Kevin O'Neill on Luter- “If Charles' knee comes back the way we're hoping it does and with the hard work he's put in, we think it will, he can be a major contributor at both wing positions. He's struggled the past two years and they have been tough for him, but I look for Charles to be a solid performer for us this year.”