Tatum was a High School All-American out of Mt. Vernon - which he led to a #1 national ranking, and was selected as the most valuable player in the New York state by sports writers. Some considered Tatum to be the #1 player in the East during his senior year.

Earl Tatum, one of Marquette’s most successful basketball players all-time, was a key component of 101 victories from 1972 to 1976. Tatum averaged 10.1 points per game as a sophomore and 13.6 points per game as a junior. Earl led Marquette in scoring during the 1975-76 season (18.3 ppg) and also served as co-captain. Tatum helped lead Marquette to four consecutive NCAA Tournament appearances and the 1974 National Championship Game.

Following his senior season in 1975-76, Tatum was named a second team All-American by the Associated Press, Basketball Weekly and Converse, as well as earning first team All- American recognition from Helms, Independent, United Press International and the U.S. Basketball Writers Association. He was inducted into the Marquette Hall of Fame in 2004 and sponsored by John Fedders.

Tatum played four years professionally after being drafted in the second round of the 1976 NBA Draft by the Los Angeles Lakers. Earl Tatum NBA Stats
Catching up with Earl Tatum Article 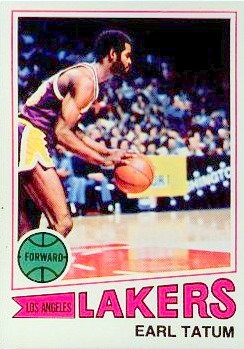