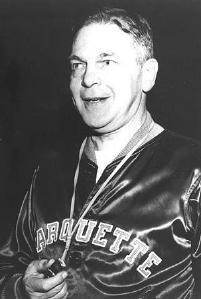 If you had to pick two new names for Edgar S. “Eddie” Hickey, “success” would have to be one of them and “great” the other. If success is any true measure of greatness, then Hickey is among the greatest in college coaching circles, because he had nothing but success in his first 23 years of coaching.

In April of 1958, Hickey was hired to take over and attempt to rejuvenate the dwindling basketball fortunes at Marquette. Upon hiring Hickey, Athletic Director Lawrence Mullins was quoted as saying, “Hickey is truly one of the nation's great coaches. I cannot help but feel that, given ample time, he will guide Marquette basketball to an enviable position in the world of intercollegiate athletic competition.”

If by “time,” Mullins meant any more than one year, he must have been somewhat astounded by the winning ways, including a 15-game streak, of Hickey's fast-breaking Warriors. If by “enviable position,” he meant something less than national rankings and invitations to both the NCAA and NIT post-season tournaments, he must have been completely shocked when these things came about in such short order.

Winning games and receiving tournament bids are old hat for Hickey. His coaching career started in 1935 at Creighton University, where in his first year, he won a share of the Missouri Valley conference title.

He continued his winning ways at the Bluejay helm until 1947, when he moved over to Saint Louis. During his 12 years at Creighton, he won or shared four conference titles, earned two bids to the NIT tournament and one to the NCAA tournament. When he called a halt, his teams had compiled a record of 132 wins and 72 defeats.

In his first season at Saint Louis, he recorded a 24-3 mark and climaxed the season by winning the NIT tournament. From that time on, Hickey and Saint Louis basketball were synonymous with success. In his 11 years at the Jesuit school, Hickey made six more trips to the NIT, reached the NCAA twice, won the Sugar Bowl Tournament twice and the Cotton Bowl Tournament once. When he left, the Billikins had run up and amazing total of 212 victories and 89 defeats.

At the time of his retirement, Hickey' career record stood at 436-231. 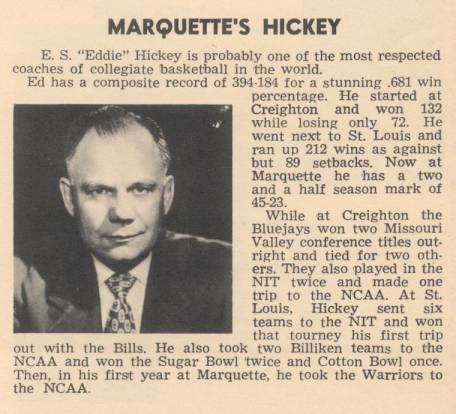 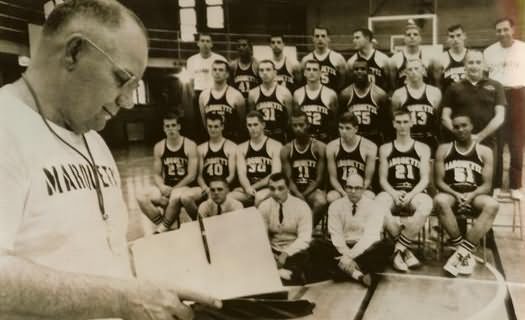