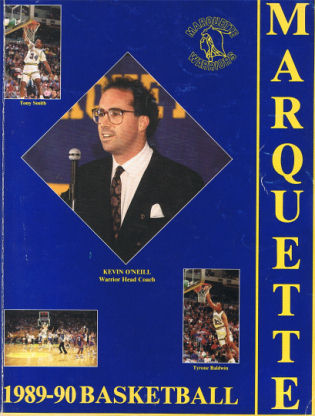 A sign in the student section at the Bradley Center on Senior Night summed up the thoughts of many in looking back at the 1989-90 Warrior Basketball season…“Kevin O. and Tony S.- Thank You For Bringing Back the Warriors. First year head coach Kevin O'Neill and senior Tony Smith led Marquette to its first winning season and post-season appearance since 1986-87. The 15-14 overall record and 9-5 MCC mark (third place) are signs of success to come for the tradition-rich MU basketball program.

Smith set new MU scoring records for a season with his 23.8 averaged and his career point total of 1,688 placed him third on the all-time Warrior scoring chart. The LA Laker second-round draft pick was phenomenal throughout the year, leading the Warriors in nine offensive categories and ranking among the NCAA leaders in scoring and free throw percentage all season.

“What Tony and Ty (Tyrone Baldwin) and all the players did for our program last year, I'll never forget it. They really gave us a great effort and helped us in a lot of ways. The entire team gave an unbelievable effort all year long,” Coach O'Neill said of his 1989-90 Warriors.

Marquette's first season in the Midwestern Collegiate Conference was a memorable one, following 72 years as an independent. MU's 9-5 MCC league mark landed them in third place overall, competing with league favorites Xavier and Dayton for the MCC regular season crown.

The 1989-90 season will also be remembered for the “twin victories” of MU rivals DePaul and Notre Dame. It was the first time since 1982 that MU beat both the Blue Demons and Fighting Irish in the same season. Trevor Powell, totalling 25 points and nine rebounds playing on a badly sprained ankle, keyed the 80-68 win over ND (MU's firsst win over the Irish since 1982). Tony Smith's 34 points led the Warriors in their 77-55 victory over DePaul in January, before a season-high crowd of 16,671 fans at the Bradley Center.

The 1990 NIT post-season bid capped the year and MU's narrow loss at Penn State (eventual NIT semi-finalist) in the opening round ended the 1989-90 Warrior campaign. At his post-game press conference, Coach O'Neill talked about his first MU team and the 1989-90 year. “This isn't the end of the season. In my mind it's the start of getting back the winning tradition we all expect at Marquettte University.” 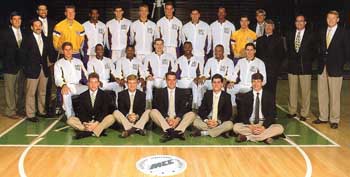 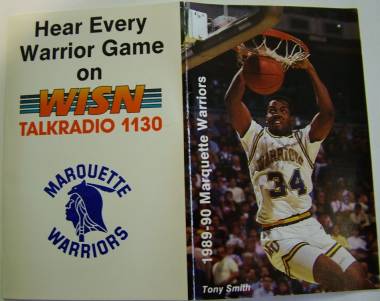 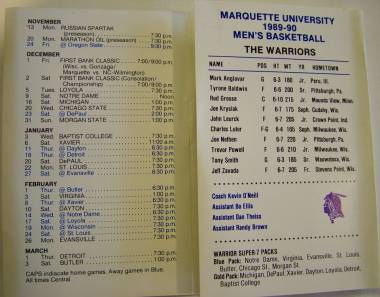