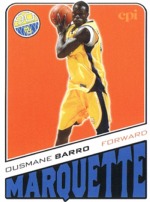 Ousmane was unable to participate in games for Chicago Julian High School as a result of rules relating to foreign-exchange students. He was able to practice daily under the guidance of Chicago Julian head coach Loren Jackson.

Played in all 31 games, starting in 14 games … Came off the bench for 21 minutes against Winthrop (Nov. 19) … Hit five free throws in six attempts (both career highs) for seven points … Made his way into the starting lineup during the Great Alaska Shootout … Recorded a career high 12 points and grabbed five rebounds against Oral Roberts (Nov. 25) … tallied a career high two steals at Nebraska (Nov. 30) … was perfect from the field making all five of his field goal attempts against South Dakota State (Dec. 3) … dished a career high two assists against South Dakota State … has been held scoreless the last four of five games … Tallied seven points, against Connecticut his most since South Dakota State … Registered his fourth block this season on a Rudy Gay shot against no. 2 Connecticut (Jan. 3) … Matched his season high number of offensive rebounds with three against Connecticut … Played 15 minutes for the second consecutive game against Cincinnati (Jan. 7) … came off the bench to score six points on 3-of-six shooting and grabbed two offensive rebounds … Tallied five points and four boards in nine minutes of action against Seton Hall (Jan. 11) … Provided a defensive spark of the bench against Notre Dame (Jan. 25) with four rebounds, a block and a lay-up in 6:50 of action … Matched a season high five rebounds against Notre Dame … Recorded a season high seven attempts from the floor against DePaul (Jan. 25) and matched his career high in that same category … Made his first start in 11 games at Pittsburgh (Jan. 28) … Led all bench players with 10 points, six in the second half, and five rebounds against St. John's (Feb. 1) … missed just one attempt from the floor shooting 4-of-5 from the floor … his 10 points mark the third time of the season and of his career he has scored 10 or more points … matched his career high two assists against St. John's … Played a season high 23 minutes against Georgetown (Feb. 16) … scored his four points in the second half … has played stellar defense for the Golden Eagles down the stretch against Pittsburgh (Feb. 18), blocking a Pitt layup and grabbing a key offensive board with less than 2:30 left, helping Marquette to clinch the win … had another solid performance at Notre Dame (Feb. 25) scoring seven points and grabbing a season high six rebounds in 15 minutes of play … Had his highest point output of his career (13) off the bench against Providence (March 4) and his season high five field goals … led the team in offensive boards with four.

Son of Moussa Barro and Awa Gueye…major is social welfare and justice.