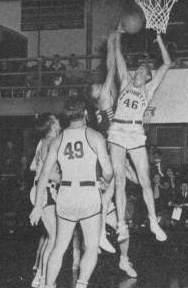 In the 1995-56 AAU National Semi-Final loss to the Buchan Bakers (Seattle, WA), Wittberger scored nine points which complemented a twenty-point performance by ex-Marquette star Terry Rand, who was in his first season with the Milwaukee Allen-Bradleys.