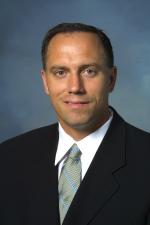 During a college-coaching career that began in 1989, Strohm has served as an assistant in top NCAA teams, reaching NCAA Final Fours with both the Utes and the Golden Eagles. He helped to recruit and bring along five NBA first-round picks, including Dwyane Wade.

From 1991-97, Strohm served as an assistant basketball coach at Northern Illinois University. Previously, he was the recruiting coordinator for Lake Land College in Mattoon, Illinois from 1989-91.

While at Utah, Strohm was Utah's administrative assistant and video coordinator from 1997-99. He also served as the director of the Rick Majerus Basketball Camp from 1998-2000. As an assistant coach, he worked with the perimeter players and coordinates underclass recruiting.

He also was one of the finalists in the University of Vermont’s 2003 search for a coach to replace Tom Brennan.

Strohm lives in Bradford, Vt., with his wife Jade and their daughters Sydney, Jordin and Rylee.