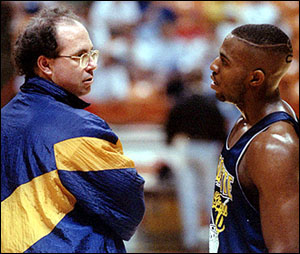 Marquette point guard Tony Miller was the key to the win. He used his superior speed to break through Pitino’s press. Miller finished with eight points and nine assists in his 40 minutes on the floor.

Kentucky's season came to a screeching halt as the Marquette Warriors dominated the game nearly from start to finish, and won 75-63. The Cats couldn't hit from outside, couldn't be effective inside, and because of their ineffective offense, they couldn't press sufficiently to force turnovers.

Arizona Coach Lute Olson was asked by Marquette Coach Kevin O'Neill how to break Kentucky's press. Olson told O'Neill to instruct his point guard (Tony Miller) to dribble directly at the big man in any 2-man UK trap. Miller managed to do this the entire game, rendering the trapping press much less effective than it usually was.

UK was plagued by repeated poor shooting and made a large number of unnecessary fouls. Marquette raced out to a 25-12 lead, as part of an eventual 16-3 run against the Cats, and they never looked back. With their lead reaching 17 points on a couple of occasions, UK was forced to play catch-up basketball all day, as it had on several occasions during the regular season, but this time, all the 3 point shooters were cold. Marquette had a 39-24 halftime lead. Kentucky missed 23 of its first 31 shots, finishing the half with 1-11 3 point shooting, and 28.6% FG shooting overall. This was UK's second biggest halftime deficit of the season - the largest was 16 versus LSU.

Marquette had its largest lead of the day at 18 (42-24) with about 2 minutes gone in the second half, after Rodney Eford hit a 3. Kentucky staged one of two rallies of the game, going on a 15-0 scoring run over the next 3.5 minutes. But with the score 42-39, Marquette scored the next 5 points, then went up 54-44. UK had chances to dig even deeper into the lead, but poor shots and careless ball- handling hurt them. Kentucky's second rally, started with about 8 minutes left in the game, brought them to within 56-54 with 6:40 remaining. O'Neill called a timeout, and Miller dashed to the basket for a layup when play resumed. UK tried 3 point bombing again in the waning minutes, but after getting 3 within 1.5 minutes, Kentucky couldn't hit one until only 2:19 remained, with the Warriors already up by 12. Marquette led by as much as 17 late in the game, and it was only due to some fortuitous 3s and uncontested shots at the end that the Wildcats managed to make the final margin “only” 12 points.

Rodrick Rhodes was a total nonfactor in the game, going 0-9 from the field, and getting 0 points. Travis Ford fouled out of the game, due largely to the fact that he was the last man back on some Warrior runouts, and he had to foul big men driving to the basket to avoid layups (smart fouls, mostly, but too many of them). Both Riddick and McCarty committed unnecessary fouls (usually right after making a basket or missing a shot) which hurt UK in their chances of making a comeback. Marquette hardly fouled at all in the second half. Both teams made the same number of field goals - 24 - but Marquette hit 22 FTs to Kentucky's 5, which was the difference. Squalid FG shooting (31.6%) demonstrated that no Kentuckian was hitting very well - this was UK's worst percentage of the season. Tony Delk hit on a passable 9-19, but many of his came as UK was far behind, and he had insufficient help from the 3 point line from any teammate. He was also the only Cat to score in double figures, which hurt. The Cats hit on only 2 of their final 18 3 pointers. Besides Delk, the other 4 starters combined for a meager 19 points.

If there was a bright side, Andre Riddick hit 2 of 3 free throws - he appears to be making some improvement in this area, which might earn him more playing time in future close games. Otherwise, the less said about this game, the better. Pitino afterwards said of Marquette, “If you don't have a big-time post game, then they're almost impossible because of their shot blocker and inside attack. We just got physically overmatched and couldn't play our game. Quickness was not a major factor in the game. Bulk and strength were.”