Rob was a three-year letterwinner in basketball and concluded his career seventh on the school's all-time scoring list with 1,226 points. Rob averaged 24 points, seven rebounds and four steals per game as a senior, helping his team to tho Olympia Conference championship. St. Mary Central earned a 15-7 record during Frozena's senior campaign, despite the team using as little as a six-man rotation with its uptempo offense and pressing defense He was also an all-conference honoree in football and baseball.

“I think his stats show that he might be the area's best player,” SMC coach Mark Ziebell said. “We relied on him throughout the year.” 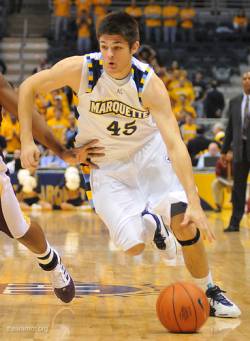 Made eighth career appearance and grabbed one rebound vs. Houston Baptist (11/14) … Had a career-high two rebounds, both on the offensive end, vs. Texas Southern (11/25) … Matched a career high with two rebounds in five minutes of action vs. Northern Iowa (11/28) … Scored his first two points of the season with a pair of free throws vs. Central Michigan (12/2) … Played in his collegiate single-season eighth game of the campaign vs. Cincinnati (1/4) … Netted his first career field goal with a layup with 33 seconds remaining in the second half vs. Seton Hall (2/17) … concluded the year averaging 0.4 points and 0.6 rebounds per game … earned second letter.

Earned MU's Standard of Excellence Student-Athlete Award … Played in each of the team's first four games of the season … tallied a career-high three points vs. Grambling State (11/21) … Knocked down his first career 3-pointer and tied a career high with three points in seven minutes of action vs. South Dakota (11/24) … Played seven minutes vs. Presbyterian (12/27), matching a career high … Averaged 0.8 points and 0.5 rebounds per game in eight appearances off the bench … Earned third letter.