Tony Benford joined Coach Buzz Williams in April, 2008. He is a veteran Division I assistant coach with strong coaching and recruiting ties throughout the Big 12 and Pac-10 geographic regions as well as in his native state of New Mexico.

Benford spent eight seasons in the Pac-10 Conference at Arizona State before joining Coach Doc Sadler’s first staff at Nebraska for the 2006-07 season. Benford also spent a brief stint in El Paso, Texas, on Sadler’s UTEP staff in the summer of 2006 before he followed Sadler to Lincoln.

During his first campaign in Lincoln, Benford helped the Huskers to 17 wins while just missing out on an upper-division finish in the conference standings. Benford spent significant time working with Husker center Aleks Maric, the leading returning scorer and rebounder in the Big 12 in 2007-08 after posting 18.5 points and 8.7 rebounds per game as a junior.

Off the court, Benford helped the Huskers make significant strides on the recruiting trail. Nebraska’s eight-man recruiting class for 2007 was ranked among the top 25 in the nation by at least three major recruiting services, including ESPN.com’s Bob Gibbons (21st), CSTV.com’s Van Coleman (12th) and HoopScoopOnline.com’s Clark Francis (5th).

In his previous stint, Benford served on the Arizona State bench as an assistant coach for his first six years in Tempe. He was then named associate head coach for his last two seasons with the Sun Devils.

During his time at Arizona State (1999 to 2006), Benford recruited and coached Pac-10 Players of the Year Ike Diogu (2005) and Eddie House (2000), and also brought in all-freshman team performer Jeff Pendergraph in 2006. Benford helped the Sun Devils to four postseason appearances during his tenure, including gaining a spot in the second round of the 2003 NCAA Tournament.

Before joining the ASU staff, Benford spent six seasons as an assistant coach at New Mexico (1993 to 1998). He helped New Mexico to five NCAA Tournament bids while winning 73.2 percent of its games (139-51 record). New Mexico picked up a pair of Western Athletic Conference tournament titles (1993 and 1996) and a regular-season championship (1994) with Benford on the sideline. During his stint with the Lobos, Benford coached the top four scorers in program history, including all-time leading scorer Kenny Thomas, who Benford recruited to New Mexico.

Benford started his career coaching youth teams, including spending four years at All Saints School in Lubbock, Texas, where he served as head coach of the junior high squad.

Sadler and Benford have a long-standing friendship that dates back to their time together at Texas Tech. Sadler served three years as an assistant coach for the Red Raiders, recruiting several players that helped TTU to a conference title and NCAA Tournament appearance in 1993. Benford returned to the Lubbock, Texas, school to complete his degree in 1992.

Benford finished his playing career at Tech in 1986 and during his playing days, he helped Texas Tech to two Southwest Conference Tournament titles (1985, 1986) and the SWC regular-season championship in 1985. He was an all-conference pick as a senior and was the league tournament most valuable player.

A native of Hobbs, N.M., Benford was a 1986 fourth-round NBA Draft selection by the Boston Celtics. He played professionally in Holland during the 1986-87 season.

As a prep all-star, Benford was a Converse All-American and the New Mexico Player of the Year after pouring in 27.5 points per game as a senior. He led Hobbs to the state title in his final season, earning MVP honors of the state championship tournament after posting 29 points in the title game.

Benford and his wife, Deborah, have two daughters, Audriana and Milena , and one son, Tony Jr. Benford also has a son, Jeremy. Audriana is in her first year as as a student at UNL in 2007-08. 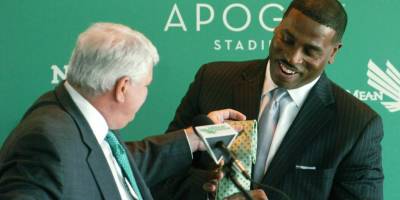