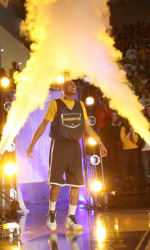 
A capacity crowd was once again on hand for Friday's Marquette Madness at the Al McGuire Center. The annual event marks the official kick off the Golden Eagles' men's and women's basketball seasons.

In addition to the fanfare and numerous activities that were scheduled, those in attendance were treated to performances by the Marquette Pep Band, cheerleaders and dance team. Marquette Madness was also streamed live online by Marquette's student-run television station MUTV.

Following the introduction of the women's basketball players by emcee Mike Jakubowski, and a brief message by head coach Terri Mitchell, things got underway with the women's Blue vs. Gold scrimmage. Jasmine Collins posted 13 points to lead the Blue team to a 24-13 victory over the Gold squad. Collins scored the last seven points of the 12-minute tilt.

In between action, the Marquette dance team performed to a Michael Jackson medley prior to Buzz Williams' introduction and the introduction of the men's players. Then followed the three-point contest, which was new to this year's event and perhaps the highlight for the 4,000-plus fans that made it out Friday night.

Darius Johnson-Odom paired up with Courtney Weibel to win the doubles portion of the three-point contest, knocking off Dwight Buycks and Tatiyiana McMorris following a heated tie-breaker between the two teams.

Johnson-Odom and Weibel then went head-to-head. Weibel brought the standing-room only crowd to its feet with 27 three-point baskets in the final round, prompting a joyous celebration by her teammates, namely Angel Robinson who picked Weibel up off the ground and hugged her following the competition. Weibel hit 16 consecutive three-pointers at one point during her run in the title round.

Six players on the men's side then competed in the State Farm Slam Dunk Contest – Jamail Jones, Joseph Fulce, Reggie Smith, Jamil Wilson, Vander Blue and Johnson-Odom. For the first time ever, fans in attendance and the online viewing audience at home were asked to text in their vote for the first round of competition.

Smith led the way with 44 percent of the fan vote and was joined in the second round by Blue and Fulce, the two-time defending champion. Smith failed to advance after missing all three of his attempts in the first set of the second round and Fulce eventually went on to top Blue to earn slam-dunk champion honors for a third straight season.

The evening was capped off by the men's intrasquad scrimmage. Johnson-Odom and Dwight Buycks combined for 23 points to lead the White team, including a game-high 14 points by Johnson-Odom. But it wasn't enough as the Blue team went on to a 42-35 victory led by Junior Cadougan, who finished with a team-high nine points, three assists and three steals.

Fans were then invited down to the floor to interact with the teams, snapping pictures with and getting autographs of their favorite MU players.