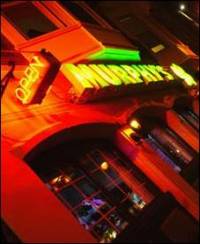 Prior to being renamed to Murphy's Irish Pub in 1996, this bar was open for business as Murphy's Law. The original Murphy's Law opened in 1986 on the northwest corner of 16th and Wells, across the street from its current location, where you will now find Qdoba. In 1992 Marquette purchased that building to construct the Campus Town West student apartments, and relocated Murphy's Law to the Marquette-owned Frenn building at 1613 West Wells St, the former location of “The Gym Bar” before it moved into the Ardmore building on 16th Street. Four student apartments are available for rent above Murphy's on the second and third floor of the Frenn Building. It is one of the four Milwaukee bars currently owned by Frank Vitucci and family, including Vitucci's Cocktail Lounge and Mantra on North Avenue and Caffrey's Pub on 16th Street. Real Chili neighbors Murphy's down Wells Street as well.

Murphy’s was extensively renovated in late 2005, adding a new ventilation system, new booths, a DJ area, several new HDTVs, and a heated and covered patio area. Murphy’s also hosts karaoke nights on Wednesday nights and features live music and DJs on Friday and Saturday nights. Murphy’s, along with Caffrey’s, is most famous today amongst MU students for offering $1 pitchers of Miller Lite for one hour after all MU home games.

In September 2005, Murphy's Irish Pub was named the Playboy College Bar of the Month.

Hoops and beer have been two of the biggest pastimes for Marquette University students since legendary basketball coach Al McGuire first patrolled the sidelines in the '70s. Both passions come together at Murphy's Irish Pub, conveniently located just one block from Marquette's urban campus in Milwaukee and a little less than two miles from the Miller brewery.

The Scene: Murphy's unspectacular but spacious interior can accommodate plenty of thirsty students who go there to catch a game on one of the five televisions, play pool on the red velvet tables, down a few pitchers or do all three. “It's a friendly bar with a nice atmosphere,” says Nick, a senior accounting major.

Above the long bar hang roughly 200 numbered mugs which students can lease for $15 a semester, making them members of the Mug Club. With $10 bottomless mug nights on Tuesdays, membership has its advantages. “It's good to have a bar with your own mug in it,” explains Griff, a senior finance major. “Mine is number three.”

Girls at the Bar: “The girls in here put the 'sin' in Wisconsin,” says Adam, a recent education graduate. The talent level at Murphy's is impressive, and most Marquette girls can drink any West Coast Barbie doll under the table. “You see some pretty faces,” says Joe, a senior business administration major. “Most college students would be happy here.”

When to Go: On Wednesday nights Murphy's packs them in with 32-ounce glasses of Miller for just $3.50. After Marquette home basketball games, pitchers are just $1 with a ticket stub, giving students clad in gold-colored Marquette gear a chance to celebrate a Big East victory for the Golden Eagles or drown a defeat. St. Patrick's Day, when revelers line up around the corner to start their day drinking at 6 a.m., is also a big annual event.

Dress Code: Wear whatever you want. The majority of the student body is from the laid-back Midwest, so jeans, T-shirts and baseball caps are acceptable. Leave your University of Wisconsin or Notre Dame apparel at home because both teams are hated hoops rivals.

At the Bar: Beer. Murphy's sells more Miller than most of the bars in Beer City. But if the hometown brew is too pricey for the college wallet, pitchers of Old Style are available for just $4. “Milwaukee is a beer town,” explains Adam. “People here drink beer, most of which was brewed just a mile-and-a-half down the street.”