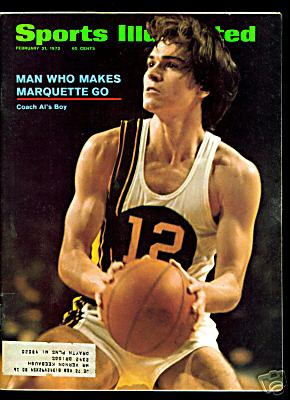 His father, Al McGuire, was the famous head coach of Marquette University in Milwaukee, Wisconsin.

Allie played at Marquette University High School, where he scored 1,219 career points, including 407 as a senior. Named to the UPI third team all-state as a junior and AP & UPI all-state second teams as a senior.

In 1973, McGuire was drafted by the New York Knickerbockers in the 3rd round of the NBA draft (pick #14). He was also drafted in the 2nd round of the ABA's supplemental draft by the Virginia Squires.

In one NBA season, 1973-74, Allie played only two games. In the ten total minutes logged for New York, he shot 2 for 4 from the field, pulled down two rebounds, assisted once, and was called for two personal fouls.

However, McGuire signed with and played for the Eastern Basketball Association's Allentown Jets for the remainder of the 1973-74 season.

After retiring, McGuire went on to a successful career at Fidelity Investments in Boston, Massachussets, where he was named Senior Vice President of Sales. 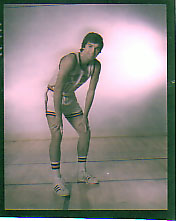 (At left) Allie, as shown in this photo negative, as a New York Knickerbocker - the team that drafted him in the 3rd round of the 1973 NBA Draft.