Coach Kevin O'Neill on Ben- “Ben is a guy who understands his role better than anyone and is a person who is great to have for so many reasons. Ben does his part as well as anyone. He is very unselfish- a real team player.”

Peavy worked as one of the team managers. Peavy worked out occasionally as a walk-on during the 1990-1991 season and in January was due to suit up for his first game when Marquette traveled to Notre Dame on January 17. However, just two days before that prior Peavy suffered a major knee injury which required surgery and ended his season prematurely.

As one of three walk-ons, Ben saw limited action in nine games off the bench, averaging .9 points per game. He scored a career-best three points against Bethune-Cookman on December 21st. He equaled that mark and pulled down two boards against Sam Houston State on December 23rd. He dished out an assist against Prairie View A&M, Sacramento State, and North Carolina State. 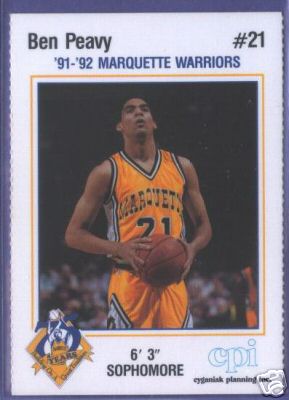