Was rated one of the top 200 players in the nation by Blue Chip Illustrated … Ranked the state's fifth-best point guard and 14th best player overall by Texas Hoops in 1996 … Suffered a season-ending knee injury in December, 1995, his senior season at A&M Consolidated High School … Averaged 17.3 points, 4.3 rebounds, 9.5 assists and 4.1 steals and shot 48.1% from three-point range as a junior … A three-time all-district honoree … Coached by Mike Terral.

As a freshman at Texas A&M, he played in 27 games and averaged 2.2 points, 1.7 rebounds and 3.3 assists, which was ninth in the Big 12 and first among the league's freshman class.

Red-shirted, after transferring from Texas A&M.

Earned first Marquette letter after playing in all 29 games, 28 as a key reserve … Averaged 15.2 minutes per outing … Third on the team in assists (2.0 apg) and had assists to his credit in 24 contests … Recorded 10 games of three or more assists and the Golden Eagles finished 8-2 in those games … Third on the team in steals (22) and had six games of two or more thefts … Solid effort vs. Houston (Mar. 8), playing 17 minutes and recording four assists, tying second-highest total of the year, and three steals … Season-long 27-minute performance vs. UAB (Mar. 1) and finished with four points and four assists … Saw a 17-minute stint vs. DePaul (Feb. 16) and finished with three points and three boards … 16 minutes against Houston (Feb. 5) and finished with four points and three assists … Good effort against UNC Charlotte (Jan. 19), scoring a season-best 10 points and dishing out two assists in 19 minutes … Hit a season-high two treys against the 49ers and sank a season-high four free throws … Tied his then season long with a 21-minute effort against Louisville (Jan. 15), totaling three assists and three rebounds … Had four assists versus Hampton (Dec. 20) … Season-high four steals and four points against Dayton (Dec. 7) … Three steals in win over Western Michigan (Dec. 3) … Totaled a season-high five assists against Wofford (Nov. 27) … Got the starting nod against Chicago State (Nov. 20) and had three points, three assists and two steals. 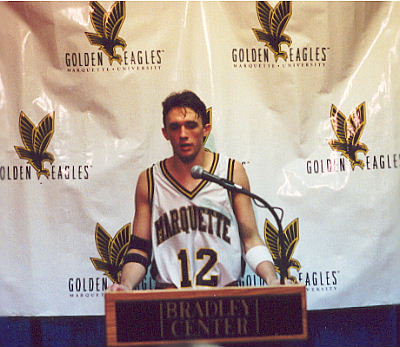 Concluded his college career by playing in a total of 111 games, 58 at Marquette.

Prior to Garden City Community College, Barone served as an assistant for a year at Central Florida Community College during the 2001-02 season under former Illinois State head coach Gene Smithson. Barone helped lead the Patriots to a 21-11 record along with a Mid-Florida Conference Tournament Championship and a trip to the Region VII semifinals.

In 2007, Brian returned to Marquette as an assistant coach under Tom Crean.

At Marquette, Barone will be responsible for assisting in the day-to-day operations of the office while also supervising the program's video responsibilities.

“Brian Barone helped me become a better coach my first two years at Marquette,” Crean said. “He epitomized the idea of student-athlete with his toughness, talent and selflessness.

“I've been a big fan of Brian and his family for a long time and happy to have him return to Marquette,” Crean added. “Brian has proven in his previous positions he's on the road to success in this business and I'm glad he'll be sharing some of those experiences with us.”

Youngest of Tony and Kathy Barone's three children … Father served as head coach at Texas A&M (1991-98) and Creighton (1985-91) … Father also played at Duke from 1966-68 and helped lead the Blue Devils to the Final Four in 1966 … Is pursuing his master's degree in communications.