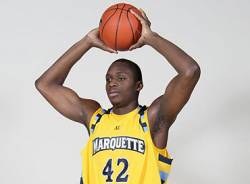 Was the last member of Marquette's four player 2008-09 recruiting class to verbally commit on November 4, 2007. Selected Marquette despite receiving offers from Nebraska, Baylor and Rice, with Kentucky, Connecticut and SMU reportedly showing interest as well.

Sidelined for the first 10 games of the season with a foot injury … Made his MU debut vs. Western Carolina (12/19) and tallied three points, one block and a rebound in 11 minutes of action … Made second career appearance vs. Presbyterian (12/28) and recorded four points and a block, while four of his five rebounds came on the offensive glass … Tallied four points, two rebounds and a pair of blocks vs. Cincinnati (1/4) … concluded the year averaging 1.3 points and 1.1 rebounds per game … earned first letter.

Played six minutes in the season opener vs. Centenary (11/13) … Scored six points on 3-of-4 shooting from the field and added a career high three blocks vs. Maryland Eastern Shore (11/17) … Garnered first career start vs. Grambling State (11/21) … Missed the remainder of the season with broken foot … Concluded the year averaging 3.7 points and 2.0 rebounds per game.

Collected a block and a steal vs. Prairie View A&M (Nov. 12) … Scored four points on 2-of-3 shooting vs. Bucknell (Nov. 14) … Had four of the team's seven blocks, establishing a new single-game career high, in 11 minutes vs. Green Bay (Nov. 17) … Posted 15 points and eight rebounds in win over South Dakota (Nov. 20) … Matched single-game career-high with four blocked shots vs. Milwaukee (Nov. 27) … Led all scorers with a career-high 19 points vs. Longwood (Dec. 4) on a perfect night (9-of-9) from the flloor, in addition to a game-high three blocks … Garnered his first conference accolade when he was named to the BIG EAST Honor Roll (Dec. 6) for his peformance against Longwood … Made 16 consecutive field goals, a streak that began vs. Duke (Nov. 22) and ended vs. Texas A&M-CC (Dec. 7), spanning a total of five games … Was 6-of-7 from the field and finished with 12 points vs. Vanderbilt (Dec. 29) … Only points against West Virginia (Jan. 1) came on a putback dunk with 1:19 remaining in the second half to give MU the lead for good in win over Mountaineers … Had a game-high two blocks vs. Connecticut (Jan. 25) … Scored all eight of his points vs. Villanova (Feb. 2) in the second half on 4-of-4 shooting from the field … Grabbed a career-high nine rebounds vs. Georgetown (Feb. 13) … Recorded a career-high four blocked shots for a third time this season and added eight rebounds vs. St. John's (Feb. 15) … Was perfect from the field (5-of-5), pitching in 10 points and eight rebounds vs. Seton Hall (Feb. 19) … Played a career-high 31 minutes vs. Providence (Feb. 27) and had 16 points and matched a career-high with four blocked shots … Matched his previous career mark with a team-high nine rebounds vs. Cincinnati (Mar. 2) … Had a pair of blocked shots, in addition to seven points and five blocks, vs. Providence (Mar. 8) in the opening round of the BIG EAST Championship … Posted two blocked shots and a team-high eight rebounds vs. North Carolina (Mar. 25) in NCAA Regional Semifinal … Otule's 55 blocks was the most by an MU player in a single-season since Faisal Abraham (84) in 1996-97.