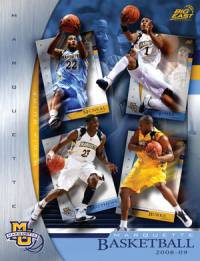 Expectations were high for a group of seniors who had made the NCAA tournament the previous three seasons, but only managed one win under Tom Crean. The team started out strong and was ranked throughout the season, but when Dominic James broke his foot during the opening minutes of the Connecticut game on February 25th, it started a downward trend. Marquette played their remaining regular season opponents close, but could not pull out a win against any of their highly-ranked opponents. Their season-ending slide dropped them to fifth in the Big East standings, with a surging Villanova squad moving up to fourth, which gave them a two-day bye for the Big East Tournament.

Marquette managed to beat St. John's on the second day of the Big East Tournament, but lost to the Final Four-bound Villanova Wildcats on a last-second shot the next day. Marquette received a favorable seed in the NCAA tournament, but a tough draw in a Utah State team, whose boisterous fans would travel very well to Boise, Idaho. Marquette managed to get past Utah State and faced Missouri in the second round. The night before the game, it was announced that Dominic James would be available to play. James ended up playing less than 20 minutes and did not score, but was able to end his Marquette career on his terms. Marquette lost a close game to a Missouri team that ended up dismantling a Memphis squad in the Sweet Sixteen, who many had predicted to be contenders for a national title.