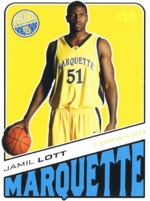 Jamil averaged 16.7 points and 8.0 rebounds for NDSCS. He led the team in field goal percentage (.547) and blocked shots (49). He helped lead NDSCS to a 28-7 mark and the school's highest year-end ranking in history. The Wildcats won the Mon-Dak, District XII and Region XIII championships, as well as placing in the national tournament for the first time in 93 years.

Jamil played in 24 games, making seven starts including five in a row. He led the team in blocked shots (16) and averaged 3.1 points and 2.2 rebounds per game. He was a perfect 3-for-3 from the floor, scoring nine points in win over Rice on November 18th. He grabbed five rebounds against Winthrop on November 19th and came off the bench to score four points at Nebraska on November 30th. He had eight points against South Dakota State on December 12th and registered four points, two blocks an assist and a steal in five minutes against Oakland on December 19th. He registered a career best three blocks against Delaware State on December 22nd, matching his career high of four attempts from the charity stripe, converting three. He tallied all six of his points, four rebounds and two steals in the second half against Lewis on December 28th and was perfect from the field for the third time this season making all three of his attempts. He had another solid performance off the bench against #2 Connecticut on January 3rd, scoring five points, three rebounds, one steal and one block. He started his third consecutive game at DePaul on January 17th and scored five points, all from the free throw line, and grabbed five rebounds. He also matched his career high in blocks with two in that contest. Jamil missed five games due to a bout with mononucleosis, but returned for the Providence game.

Jamil set a career highs with 11 points and seven rebounds against Hillsdale on Novemberr 10th, hitting four of five field goal attempts. He grabbed three rebounds and had four points in 13 minutes against Providence on January 4th and was perfect from the foul line (4-4) against Seton Hall on January 4th, scoring six points to go along with two rebounds.

Jamil is the son of Stanley and Darcel Lott. He has two younger sisters, Terianne and Mia and majored in sociology.