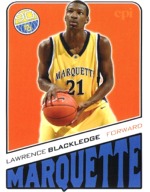 A major contributor during his two seasons with the Blue Storm, Blackledge averaged 10.6 points, 6.5 rebounds, 3.2 blocks and shot 56-percent from the field in leading his team to 34 victories and a sixth place finish in the NJCAA national tournament in his last season … possess a seven-foot wingspan and blocked 230 shots during his two years at SWIC … was named First Team All-Great Rivers Athletic Conference in 2005-06 and an honorable mention NJCAA All-American.