Cobb transferred to Marquette after spending two years at Ranger Junior College in Ranger, Texas. While at Ranger J.C., he was one of 25 players selected to try out for the junior college division of the Olympic Trials. Cobb averaged 25 points per game in each of his two seasons. 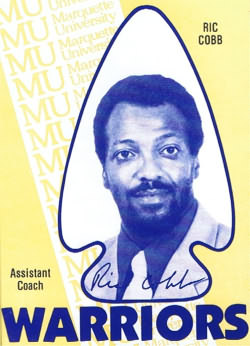 Once his playing days were over Cobb returned to Marquette as a coach, serving as an assistant under Rick Majerus. After Majerus left Marquette, Cobb applied for but did not get the head coaching job. He turned his attention to high school basketball where he was a very successful AAU coach. Cobb's AAU teams produced numerous Division 1 players, including Calvin Rayford (Kansas), Kevin Rankin (Northwestern), Larry Hisle, Jr., Jeff Peterson and Otto McDuffie from Wisconsin, Damon Key, Jim McIlvaine and Shannon Smith from Marquette. After 7 years in the AAU ranks, Cobb returned to the college game. He was an assistant at UWM for one year under Steve Antrim, before assuming the head coaching reigns in 1995. He was the team's coach from 1995-1998 and compiled a record of 28-81.