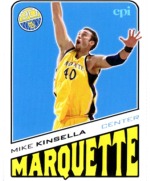 Three-year varsity player for John Marshall High School… As a senior averaged 21.2 points, 10.0 rebounds and 3.0 blocks in leading his team to the 2002 Big Nine Conference Championship… Following his senior season was selected first team All-State by the AP and Minnesota Basketball News… Was a state of Minnesota McDonald's All-American nominee during his senior season… Averaged 16.2 points, 8.7 rebounds and 2.2 blocks during his junior season.

Was a medical redshirt his freshman year due to a stress fracture in his right foot… Didn't appear in a game for Rice… Transferred to Minneapolis Tech in May 2003.

Played in 16 games, averaging 1.6 points and 1.3 rebounds… Missed the entire month of December due to a right foot injury… Averaged 2.0 points, 1.4 rebounds and 5.2 minutes in MU's five games prior to the injury… Scored a season high six points twice (Nov. 15 vs. Illinois St. and Mar. 14 vs. W. Michigan)… Had eight points in 18 minutes over Marquette's final two games.

Played in 14 games due to injury making two starts … Made his season debut against South Dakota State (Dec. 3) and recorded two points in seven minutes of action … Played a career high 16 minutes against Oakland (Dec. 19) and recorded a season high three points and one block … recorded his second consecutive game of one tally from the field and one board against Delaware State (Dec. 22) in four minutes of play … His field goal with four seconds left gave Marquette its largest lead of the game, 50 points, against Lewis (Dec. 28) … recorded his first point in three contests at West Virginia (Jan. 14) in just one minute of action … Tallied back-to-back blocks in four seconds against Notre Dame (Jan. 20) … Finished the game with a career high three blocks … Made his first start of his career against St. John's (Feb. 1) … Recored his second consecutive start at Villanova (Feb. 4) and recorded a season high three rebounds in seven minutes of play … Saw his first minutes of action after an emergency appendectomy against Providence (March 4).

Is a member of the Rochester Fire of the American Basketball Association (ABA). The original owner could not come through with the money needed to run the organization, so new owners took over.

In August 2008, Kinsella signed a one-year contract to play professionally for a top Romanian league basketball team, U Mobitelco Cluj-Napoca. Not far into the season, he badly sprained his ankle after playing in six games. His contract was bought out on December 11. He averaged 14 points and 6 rebounds in about 20 minutes per game.

He later signed with USC Freiburg, a German team, and averaged 19 points and 9 rebounds in nine games played.

Son of Tom and Mary Kinsella… Majored in Communication Studies.