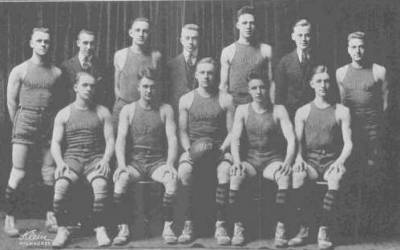 The fire of athletic enthusiasm at Marquette during the season of 1916-17 flickered in a proportion inverse to the temperatures registered at the University observatory. When the campus winds bore with them a chill that penetrated even the wooliest chincilla, when the Thanksgiving day cold froze the sodden gumbo of the Marquette gridiron so firmly, that even hardened quarterback bones picked a careful course, athletics refused to die down to a mild interest in winter bowling.

Basketball was the student demand. The time seemed right. The school was ready for it and a wise board of athletic control reinstated the game which in former years, did not awaken enthusiasm to the extent of submission to an admission charge.

There were many problems. It is a credit to athletic management at the school that they were met. the first difficulty, fundamental in other matters than the issue of a Hilltop, was the problem of financial support. It seemed unfair to ask students for more assistance in view of the fact that a liberal subscription from each had already been made toward the athletic fund. But a little money was gingerly issued from the general fund and a Marquette night was held at the Majestic theater. The fraternities hung bunting from the boxes, they held up the program. Dempsey got up on the stage, everybody yelled and the box office garnered a few dollars to buy witch hazel to pay car fare.

Lapham park floor was secured for the games, but a yard of tape in the voluminous scarlet coils of the Milwaukee school board dictated that no admission charge could be made. So the students were told to come early to get the best seats and that part of Milwaukee's population that peeps through the knot holes in the Athletic park fence reveled in the glory of a free show.

Down into the bowels of the Third ward somewhere (no one not associated with the team ever followed them), the players went to practice. The mysterious influence of Little Italy environment is difficult to fathom, but suffice to say that when the boys had sojourned there for some time, they returned a real basketball team.

Then came the game with the Milwaukee Normal school. The contest offered the students the chance to see the team in action for the first time. Delmore, the darling of the gridiron, shown luminant in the pedagogical atmosphere. When he and four others were done, the score was just about what it should be 24-16 in favor of Marquette, beginning the NCAA streak for most consecutive victories in a series without a loss that Marquette has extended further, as of the 2008-09 season.

Ralph Risch was engaged to expound the secrets of the dribble and the criss-cross pass. The secret, whatever it may have been, was well-imparted, as the season's first game indicated.

Whitewater Normal on Whitewater's floor was Marquette's first victim. Delmore, Divine, Faye, Long and Johnston slipped quietly out of town on January 16th and the long-distance phone, which verily reaches everywhere, that night announced that the venturesome five had won their game by a score of 35-26.

Enthused by a victory, the students arose to a hearty support of the team. Even the advisory board, feeling the vigorous thump of the student pulse, assembled and delegated the duties of student basketball manager to T.R. Schmidt, a junior of the Economics department. Himself a veteran of the high school back home, T.R. was well-qualified to serve as the civilian hand-maiden of the Varsity quintet.

The gruff, masculine, distinctly Marquatian rah rahs, booming in defiance to the more elite cheers of the potential teachers, who came to “ruut” at the Normal game, convinced even the players that basketball was established. So, they elected a captain, John Faye of La Crosse.

The team next met Concordia College at the college at 35th and State Streets. The boys looked upon the game much in the light of good practice- a great deal like an Uhlan might be expected to consider firing at a few Red Cross nurses between shots at the British Tommies. It was only the fastest kind of playing that prevented a new conception of the story of the bull dog and the porcupine. But when the whistle blew, Marquette was leading by a score of 35-31.

At the next game, played against Lawrence at the Milwaukee Y.M.C.A. gymnasium on the evening of January 27th, Marquette avenged the injury inflicted by the defeat in football administered to the Hilltop in the fall. Brilliant floor work by Delmore and team play by Reilley, Long, Johnson, Faye and Devine made Lawrence dizzy. When the game was called, the visitors were reeling at the short end of a 19-14 score. It was one of those scrappy, hard-fought games that made the more sedentary students feel that after all it was well that their knees were tucked away, safely out of harm.

On February 3rd, the team met defeat in a game with Campion College of Prairie du Chien. The score was 22-14. The court was small, it is said, and there wasn't much room for ambitious players, who are accustomed to use the whole of a regulation floor. But this is an explanation that doesn't go in Prairie du Chien.

The next game Marquette lost to Carroll College in the Lapham park pavilion by a count of 24-21. The team was somewhat weakened by the injury of Delmore, but it played one of the fastest games it has ever been the privilege of Milwaukee to see. But in spite of all the exertion, there was no unity of action. Carroll had mastered well the gentle art of goat-grabbing.

To retrieve their waning fortunes, the boys took another trip to the Normal school on February 10th. Shorty Evans took the place of Delmore, whose knee still ached with Carroll experience. During the first period, Marquette's guards prevented the teachers from finding the basket even once, while the boys at the upper end of the floor tossed the ball for ten points. Marquette scratched a little in the second half, and was obliged to give the Normal a reluctant seven points. The fowards, however, increased the Hilltop lead to 22.

Another scalp was added to the Marquette belt when on February 24th, the Oshkosh Normal was defeated at Lapham park, by a score of 24-16. The thrill that feels like a bet on Detroit, when Cobb wallops for a round trip came on February 26th, when Carroll was humbled on the Carroll floor by a score of 22-19. The loyal hundred that followed the team, returned to Milwaukee jubilant, satisfied and immensely affluent. The game, as they reported it, “was as pretty a thing as you ever saw.” The count see-sawed and it was Marquette's superior floor work that placed her in the “see” when time was called.

The game that ended Marquette's blushing maiden season, quite fittingly, quite encouragingly, was a victory. it was Beloit that offered on the altar of Marquette's basketball aspirations. The team from southern Wisconsin came to Milwaukee ambitious and capable. It was well able to maintain the loser's end of one of the season's fastest games. The dribbling of Long and Johnston and the guarding of Captain Faye spelled the combination that ended in a flush of achievement the basketball season. The score when the timekeeper whistled the knell of the term's athletics was 23-14.

The season was an experiment and an accomplishment. It was a beginning and it was in itself, an end. The players that ducked under the showers after that last game on March 10th knew they had been witnesses at the baptism of a new University activity. They knew their bruised shins and scratched faces were a part of the ingredients that will go toward making a greater and better Marquette. Out of their efforts they could see arise visions of a gymnasium at Marquette, and a team that will bid strong for recognition in the sporting pages of the great Northwest. But like those ancient statues of Janus that look with their two faces in all directions, they could commune with their memories and feel the satisfaction of knowing that in this first of many seasons they had wrought well.