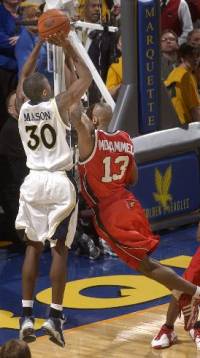 Down 80-78 with under three seconds left, Louisville's Alhaji Mohammed forgot who he was guarding as the Cards prepared to defend a Marquette out-of-bounds play from underneath the goal. The recipient of this good fortune for the Golden Eagles was freshman Dameon Mason, who was standing all by himself in the left corner. Trigger man Scott Merritt found Mason, who drilled the baseline jumper and was fouled by Mohammed.

After a timeout, Mason calmly sank the free-throw and Louisville threw the ball away to ensure yet another loss for the slumping 24th ranked Cardinals.

It seemed as though Louisville had caught a massive break moments earlier when Travis Diener was whistled for his fith foul, when replay proved that it was actually Carlton Christian who was the guilty party. The Golden Eagles' Brandon Bell then came down and took a wild three-pointer that bounced hard off the back-board, but went off the hands of Francisco Garcia to give MU its final shot.

The drama only increased after the final buzzer, however, as the Golden Eagle staff found multiple copies of a Milwaukee Journal-Sentinel article in the Louisville locker room which had been doctored to include a quote from Tom Crean calling the Cardinals one of C-USA's “lesser teams.” Crean called the motivational ploy low and ridiculous, while Pitino said it was a joke he had no prior knowledge of.

The win was also notable because it was Crean's 100th at Marquette.