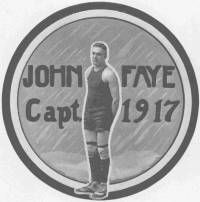 Fay was the team captain in Marquette's inaugural 1916-17 season. He also played football during the 1916 season and served on the Pan-Hellenic Council in 1918.

Outside of being quite the athlete, John gained (and fully deserved) the reputation for being a lady's man. Parties at Normal and Downer were his chief delight. Fay went on to a successful career as a dentist, before retiring to St. Augustine, Florida.