The Big East was founded in 1979 when Providence, St. John's, Georgetown, and Syracuse invited Seton Hall, Rutgers, Connecticut, Holy Cross, and Boston College to form a conference primarily focused on basketball, with Rutgers and Holy Cross declining to join. Villanova joined a year later in 1980 and Pittsburgh joined in 1982. In 1985, Penn State applied for membership, but was rejected, with only five schools in favor (Penn State needed six out of eight). It was long rumored that Syracuse cast the deciding vote against Penn State, but Mike Tranghese confirmed that this was not the case and that Syracuse had, in fact, voted for Penn State's inclusion.

About a decade after the conference's inception, Big East members decided to become a major football conference and thus added five schools including four-time champion Miami, Temple, Virginia Tech, West Virginia, and Rutgers. Penn State joined the Big Ten Conference. The inaugural Big East football season launched in 1991. West Virginia and Rutgers were football-only members until 1995, Virginia Tech was a football-only member until 2001, with Temple remaining a football-only member until 2004, after failing to attract enough consistent fan support. The Big East offered Notre Dame a non-football membership effective 1995. This led to an unusual conference structure with some schools competing in Division I basketball only. 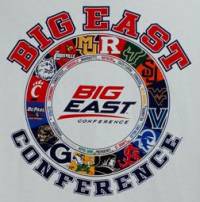 This had long led to rumors of instability, and in 2003, ongoing press reports of tensions between the football schools and the basketball schools finally exploded into a months-long public tug-of-war between the Big East and the Atlantic Coast Conference over several Big East members. The end result was that three Big East schools — Virginia Tech, Miami and Boston College — moved to the ACC, while five teams moved to the Big East from Conference USA — Louisville, Cincinnati, South Florida, Marquette, and DePaul.

The addition of the three football schools, along with Big East non-football member Connecticut moving up to the Big East football conference, ensured that the league would keep the minimum eight teams needed to keep its BCS bid. In addition two traditional basketball teams, DePaul and Marquette, were added to gain the Chicago and Milwaukee television markets and help the already solid basketball status of the conference.

In January 2006, Loyola University Maryland (then Loyola College in Maryland) joined as an associate member in the sport of women's lacrosse.