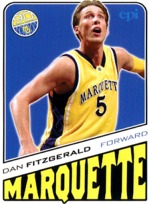 A three-year letterwinner in basketball and soccer… A Street & Smith's All-American and a McDonald's All-American nominee as well as an all-state selection as a senior by the St. Paul Pioneer Press… As a senior, averaged 16 points, nine rebounds, four assists, two steals and one block per game for the Cadets… A two-time all-conference selection who helped his team to two Classic Suburban Conference championships… Team advanced to state championship game as a sophomore and sectional championship as a junior and senior… Averaged 15 points and 10 rebounds per game as a junior, including a 35-point effort which included eight three-pointers… Honorable mention all-state player as a junior… Captained his basketball team as a senior and was a two-time team captain in soccer, in which he earned all-league honors as a senior.

Came off the bench and made both field goal attempts against Hillsdale Coll. (Nov. 10) … scored six points in 25 minutes against Idaho State (Nov. 13), where had six free throw attempts … hit double digits for the first time in 2006-07 with 12 points against Eastern Mich. (Nov. 18) … scored 11 points to help MU to a CBE semifinal win over Texas Tech (Nov. 20) … grabbed a season high seven rebounds against Valparaiso (Nov. 27) … recorded six rebounds in win over Northwestern State (Dec. 1) … in first start of season scored 13 points, hitting 5-of-7 shots from the field and grabbed seven rebounds vs. Delaware State (Dec. 5) … made second start of season, scoring two points and grabbing two rebounds against Wisconsin (Dec. 9) … scored eight points, grabbed six rebounds and made a career high four steals vs. UMBC (Dec. 16) … grabbed four rebounds and scored four points in 17 minutes against Oakland (Dec. 19) … scored 11 points, including nine points from beyond the ark, against Morgan St. (Dec. 22) … tallied seven points and five rebounds vs. Savannah St. (Dec. 30) … scored eight points and grabbed five rebounds off the bench against Providence (Jan. 4) … grabbed five rebounds in 19 minutes vs. West Virginia (Jan. 13) … tallied a 14 points, going 4-for-6 from three-point range, in 30 minutes off the bench at Pittsburgh (Jan. 21) … in 14 minutes against USF (Jan. 28), was 3-for-3 from the field, including 2-for-2 from beyond the ark, for eight points … in 25 minutes off the bench, scored 14 points, going 4-for-6 from beyond the ark while grabbing five rebounds vs. Providence (Feb. 3) … in 30 minutes, recorded 10 points against Rutgers (Feb. 7) … in 21 minutes, scored 16 points at DePaul (Feb. 14) … scored nine points, all in the second half, against Louisville (Feb. 17) … matched a season high with seven rebounds against Notre Dame (Feb. 24) … against St. John's (Mar. 7), scored a career-high 20 points … matched his career high with 20 points while playing in a career-high 34 minutes against Pittsburgh (Mar. 8).

Played in all 31 games in 2005 making two starts at Seton Hall and West Virginia … Proved to be a valuable reserve for the Golden Eagles back court averaging 5.3 points per game and 2.4 rebounds per outing … In Marquette debut, nearly recorded a triple double, scoring nine points, grabbing eight rebounds and recording eight assists in win over Rice (Nov. 18) … Went to the free throw line a career high six times, converting five of his attempts against Oral Roberts (Nov. 25) … Played a season high 29 minutes against South Carolina (Nov. 26) … Came off the bench to lead the reserves with eight points and three rebounds against Valparaiso (Dec. 7) … Foulded out for the second time this season after tallying seven points, three rounds, one assist and one steal at Wisconsin (Dec. 10) … Matched a season best field goals attempted (six) against Oakland (Dec. 19) … Came off the bench to record five points and four assists against Lewis (Dec. 28) … tallied his second most minute total of the season playing 25 minutes against Cincinnati (Jan. 7) … Made his first appearance in the starting lineup at Seton Hall (Jan. 11) … Recorded a season best seven attempts from the floor in his second consecutive start against West Virginia (Jan. 14) … Led all scorers against DePaul with a career high 18 points scoring all his points from three pointers … notched a career high six field goals and six three-point field goals against DePaul … with six three pointers by Fizgerald, Marquette has had a player hit six threes in each of the last three games. … had four three pointers by half time matching the most a Marquette player has tallied from behind the arc this season … came off the bench to record 18 of the bench's 27 points … Tallied a career high two blocks at Pittsburgh (Jan. 28) … All five of his attempts from the floor against St. John's (Feb. 1) came from beyond the arc, marking the first time this season he has not attempted a basket from anything but beyond the arc … scored six of his eight points from three point range at Rutgers (Feb. 12) for the third time in four games … Led all bench scorers with 10 points in 17 minutes of action … Made all four of his field goal attempts from beyond the arc for the eighth time this season against Providence (March 4).

Returned to the bench against Charlotte (3/6) after starting four straight games… Made his second straight start against Saint Louis (2/28), playing a career-high 32 minutes and scoring four points with four boards… Tallied 10 points and matched his career-high with five rebounds against UAB (2/25), hitting a pair of crucial free throws with 16.4 seconds to go… Exploded for a career-high 16 points, including four three-pointers, in the loss at Marquette (2/21)… Matched his career-best with 10 points against TCU (2/14), while assisting on the game-winning basket with a pass to Vytas Tatarunas for the victory… Came off the bench to score a career-high 10 points to go with four rebounds and three assists in 18 minutes against USF (2/7)… Scored a then-career-high eight points for the third time against UAB (1/28), while also matching his career-high in minutes with 21… Matched his career-high with eight points in 21 minutes against Savannah State (1/24)… Scored seven points in 14 minutes of action against Memphis (1/20)… Saw 19 minutes of action against #8 Louisville (1/17), snagging a pair of rebounds… Played a career-high 21 minutes against Nicholls State (12/31)… Tallied three points and two boards against Mississippi State (12/27)… Registered a career-best eight points with four rebounds and two assists against Northwestern (12/9)… Tallied four points with a career-high three assists against Rice (12/3)… Scored three points in 18 minutes of action against Southern (11/25) in his collegiate debut… Collected five rebounds in the win over UAPB (11/29).

Participated in a 2008 Minnesota Timberwolves pre-draft workout and eventually played for the Timberwolves' NBA Summer League team in Las Vegas during the Summer of 2008. He only saw action in three games however.

The following are excerpts from the Wolves News:

Marquette Forward Dan Fitzgerald
Q: On working out for his hometown NBA team:
Fitzgerald: It was a lot of fun. It was a good opportunity to get my name out there a little bit and see how it goes … All the stuff we've done here I've done during my four years at Marquette. It was a little nerve-racking, but it was fun.

Q: On his chances of latching on to an NBA team following the draft:
Fitzgerald: We'll see (if) it comes. If not, it's fine, I'll go to Europe and get better and try again next year … I'm just happy to play and get paid for it; it's a pretty nice job.

Wolves Assistant Coach Jerry Sichting
Q: On Fitzgerald, whom he coached at Marquette:
Sichting: Well Dan was a real good college player. His senior year he had some injury problems, so he probably didn't have the kind of senior year he wanted to have. But he's a great guy, a local kid here, I think his parents (have been) season ticket holders for the Wolves for a while, so they are big Timberwolves fans. Dan will most probably end up in Europe some place, but he was a solid college player and a great guy and it was fun to coach him.

After the 2008 NBA Summer League games, Fitzgerald signed with Team Brussels for the 2008 EuroLeague Summer season and with ratiopharm Ulm, a German team in the Basketball Bundesliga (BBL), for the upcoming 2008-09 season.