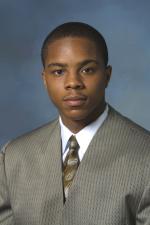 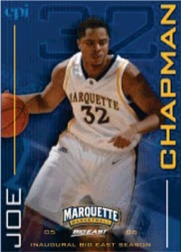 Comes to the Marquette from Bloom High School where he averaged 20.0 points, 6.0 rebounds and 4.0 assists per game as a senior … Shot 50 percent from three-point range his final year … Was coached in high school by Gary Meyer, a member of the Illinois high School Basketball Hall of Fame … Daily Southtown All-Area honoree on two occasions … Co-MVP of the North Team in the Illinois Basketball Coaches Association AA All-Star Game … Earned three letters and was a two-time captain … Two time all-state selection … Named the co-MVP of his conference in 2001-02 … Chosen to All-Tournament Teams at Bloom Township and the Big Dipper … As a junior, he averaged 22 points and 10.0 boards per contest … Regarded as a fierce competitor who played through injuries … Finished his prep career with more than 1, 300 points and 500 rebounds … Played AAU ball for the Illinois Wolverines under Ron Newquist … At the 2001 AAU national tournament in Orlando, he was named second team All-American … Chose Marquette after considering Illinois, Bradley, Illinois State, Indiana, and Michigan State.

Came off the bench in each of MU's 33 games and averaged 9.6 minutes per outing … Hit all four of his three-point field goal attempts, two in each game, in NCAA Tourney games vs. Holy Cross (Mar. 20) and Missouri (Mar. 22) … Finished with six points in each contest and tied his season high with five boards vs. Holy Cross … Recipient of the team's year-end Hit the Deck Award, awarded to the player that takes the most charges during practice and games … Hit both field goal attempts and finished with four points while coming up with a season-high two steals against UAB (Mar. 1) … Good defensive outing with four rebounds and one steal in 15 minutes (tying season long in a conference game) against Louisville (Feb. 27) … Good game off the bench vs. Cincinnati (Feb. 1), hitting both field goal attempts en route to five points while grabbing three rebounds in 12 minutes … Registered five points, tied his season high with three assists and grabbed five rebounds vs. South Florida (Jan. 11) … Played a season-long 22 minutes at Dayton (Jan. 4) and registered five points and two rebounds … Hit a season-high tying three field goals and finished with six points, along with four boards vs. Grambling (Dec. 28) … Scored in 18 contests including a seven-point afternoon against Appalachian State (Dec. 7) that saw him hit three field goals in five attempts … Had rebounds to his credit in 21 appearances … Turned in an eight-point performance vs. Texas-San Antonio (Nov. 23) in the championship game of the Pepsi Blue and Gold Classic.

Played in all 31 games, making 15 starts… A starter in MU's first 14 games… Played 10 or more minutes in 26 games… Recorded a career-high 13 points on three occasions (Nov. 21 vs. Valparaiso; Mar. 15 vs. Toledo; Mar. 23 vs. Boise State)… Had a career-high six rebounds vs. Arizona (Dec. 13)… Recorded five or more points 14 times… Third on the team with 18 three-point field goals… Fifth on the team with 18 steals… Averaged 5.7 points and 2.3 rebounds as a starter, 3.8 points and 1.1 rebound as a reserve… Recorded nine points and two rebounds vs. Valparaiso (Nov. 22), helping lead MU to its fifth consecutive Pepsi Blue & Gold Classic Championship… Had nine points, six rebounds and two assists vs. Arizona (Dec. 13)… Had seven points and four rebounds in a career-high 26 minutes vs. Wisconsin (Dec. 20 )… Closed out December by recording seven points against Florida A&M (Dec. 22) and nine points against Sacred Heart (Dec. 29)… Averaged 7.0 points and 3.3 rebounds over a six-game stretch from Dec. 5-29… Tied his career-high with three assists on three occasions (Dec. 29 vs. Sacred Heart; Jan. 20 vs. Charlotte; Feb. 7 vs. DePaul)… Had three points and three steals in victory over Louisville (Mar. 6)… Recorded 13 points, three rebounds and two steals in NIT first round victory over Toledo… Connected on 5-of-13 three-point field goals during postseason NIT play… Averaged 9.3 points, 2.0 rebounds and 1.3 steals in MU's three postseason NIT games… Recipient of MU's year-end Super Sub and Hit the Deck Awards.

Played in all 31 games, making 22 starts, including 14 of the last 15 games… Averaged a career-high 8.1 points and 2.0 rebounds… Assumed point guard duty as a result of injuries to Travis Diener… Recorded a career-best 40 three pointers; third most on the team… Averaged 9.3 points and 3.3 rebounds over the final six games… Made 15 threes in the final seven games… Had a career-best 36 assists… Made 27 threes during conference play; second most on the team… Played 30+ minutes in eight of the team's final nine games… Had 11 double-figure scoring games… Recorded three or more rebounds 11 times… Averaged 10.7 points and shot 48.5-percent from three in MU's seven games during the month of February… Scored a career-high 21 points against UAB, which included a career-high 5 three-point field goals (Feb. 2)… Played a career-high 41 minutes in double-overtime victory over Saint Louis (Jan. 29)… Pulled down a career-high seven rebounds against Cincinnati (Feb. 24)… Dished out a career-high five assists against Houston (Mar. 2)… Scored 13 points and pulled down five rebounds in the Blue & Gold Championship game against Kent State (Nov. 20)… Averaged 14.0 points and 5.5 rebounds in Blue & Gold Classic… Named to the Blue & Gold Classic All-Tournament Team… Had nine points in 19 minutes off the bench in the victory over Wisconsin (Dec. 11)… Had 14 points and two steals in 20-point victory over Nebraska (Dec. 21)… Scored 14 points, including the overtime-forcing three-point field goal, against St. Louis (Jan. 29)… Had 11 points and three rebounds in one-point loss to #12 Louisville (Feb. 17)… Recipient of MU's year-end Hit the Deck Award.

Saw action in every game this season and made 17 starts, including the last 14 of the season … Averaged 6.0 points and a career best 2.5 points … Blocked a career best seven shots … Grabbed two rebounds and dished three assists against Rice (Nov. 18) … Led the Golden Eagles with 17 points against Eastern Washington (Nov. 23) … Matched his season high five rebounds against South Dakota State (Dec. 3) … Was perfect from beyond the arc sinking both his three-point attempts against Valparaiso (Dec. 7) … Grabbed two rebounds for the fifth straight game against Delaware State (Dec. 22) … In his first start of the season against Lewis (Dec. 28), he tallied 11 points, his second double digit scoring effort of the season, and grabbed a season high seven rebounds … Dished a career best six assists against Lewis … In his second consecutive start against no. 2 Connecticut (Jan. 3) he recorded his third double digit point performance of the season with 12 on two three pointers and all six of his attempts from the charity stripe … had a seven point performance including two crucial free throws with 18 seconds left in the game to seal the 67-63 win over Seton Hall (Jan. 11) … Came off the bench and registered a season best 18 points at No. 16/23 West Virginia (Jan. 14) for his fourth double figured performance of the season … Topped his pervious career best attempts from the floor and Made all but one of his attempts from the floor sinking a career best seven field goals against West Virginia … One of four Golden Eagles to score in double figures at DePaul (Jan. 17) tallying 11 points in his fourth appearance in the starting lineup this season … Was perfect from long range going 3-for-3 for the second time this season … Has started in the last four games … Has made two of his attempts from the floor the last three games … Grabbed six rebounds, his most since the Lewis game, against St. John's (Feb. 1) including a season best four offensive boards … recorded his sixth double figured scoring performance, first in five games, with 11 points at Villanova (Feb. 4) … Was perfect from long range for the second time this season making all three of his attempts at Villanova … Dished four assists for the second consecutive game at Rutgers (Feb. 12), his most since late December … scored all six of his points from three-point range at Rutgers … Made a crucial three pointer with 2:37 left in the game to give marquette a two point lead, 51-49, and added two free throws with 12 seconds remaining in the game to help it clinch the 57-51 win over Georgetown (Feb. 16) … Had another solid 25-minute performance against Pittsburgh (Feb. 18) scoring nine points including a clutch free throw with less than one second remaining in the game to seal the win … One of four Golden Eagles to register 10 or more points at Notre Dame, scoring 11. 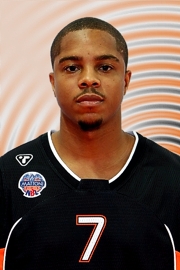