The 1970 Marquette men’s basketball team finished the season with a 26-3 record and defeated St. John’s to win the National Invitation Tournament (NIT). The 26 wins and 89.6 winning percentage were both school records at the time and are now good for third all time.

Al McGuire turned down a bid to the NCAA Midwest Regional in Fort Worth, Texas, after being denied an invitation to the Mideast Regional that was being held closer to home.

Marquette accepted a bid to play in the NIT in New York City and defeated Massachusetts in the first round, behind Ric Cobb's 15 rebounds (a Marquette NIT record). Dean Meminger knocked down a Marquette NIT-record ten foul shots in the win over Utah, which sent the Warriors to face Pete Maravich’s LSU squad in the semi-finals. Maravich was 12 of 16 from the foul line (both records for a Marquette opponent in the NIT), but Marquette set NIT high marks of their own from the charity stripe, taking 47 freebies and connecting on 27 of them. They also made 37 shots from the floor and scored 101 points, both records for a Marquette team in the NIT. Joe Thomas also tied the Marquette record for rebounds in an NIT contest with ten boards against the Tigers.

Marquette faced local favorite St. John’s in the NIT Final. Bill Paultz pulled down 17 rebounds for the Redmen (a record for a Marquette opponent in an NIT game), but the Warriors still managed to bring home the Championship, 65-53. Marquette's success came in spite of the fact that they shot just 58.2% from the foul line for the season, a mark of futility that stands to this day. The team was ranked eighth in the final Associated Press poll and 10th in the final United Press International ranking. They were ranked 10th in the nation in scoring defense, allowing 64.5 points per game.

On Marquette's decision to play in the NIT

NCAA Tournament Chairman Tom Scott: Our purpose is to select the 10 independent teams we consider the best in the country and we certainly feel Marquette is one of those teams. Marquette was third in the Mideast. The third team is the one we can move to another regional.

Coach Al McGuire: Our heart was set on going to the NCAA Tournament at Dayton. We belong in Dayton.

Dean Meminger: You must stand up to the establishment.

Coach Al McGuire: The decision of the athletic board is to go NIT.

Adolph Rupp: I think anytime the NCAA invites you to a tournament they're doing you a great honor.

Coach Al McGuire: We were shafted.

Journal sportswriter Terry Bledsoe: If you're wondering about the propriety of a coach helping to pick out his own opposition…welcome to the club!

Coach Al McGuire: They couldn't give us a reason… It might have been something between committee members and me.

Adolph Rupp: Hell, no, I had nothing to do with it.

Adolph Rupp: I wanted…to play them out of their home territory where they intimidated us last year.

Coach Al McGuire: If you slap me, I'm going to punch you.

Adolph Rupp: You saw how he acted at the regionals a year ago.

Journal sportswriter Terry Bledsoe: Rupp and McGuire don't like each other, you see.

Coach Al McGuire: …It was the hurt, the pride…I think that's important.

Dean Meminger: You can't let people walk all over you.

Adolph Rupp: I think the NCAA is one of the outstanding groups controlling sports in this country. They would not say or do anything unethical.

Coach Al McGuire: I wanted to go to the NCAA. 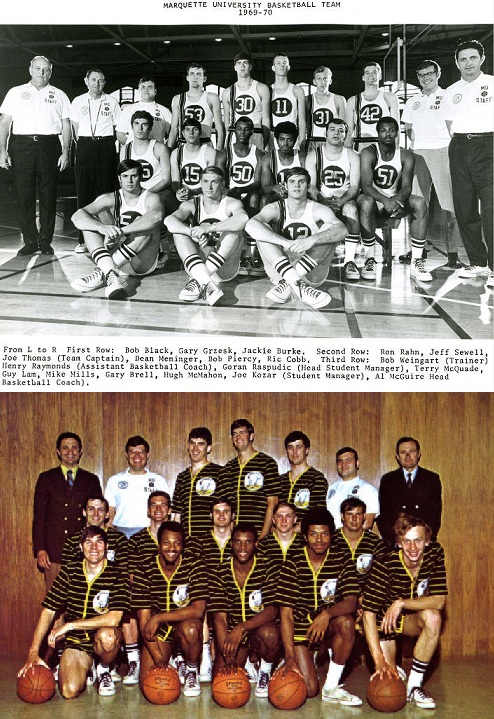