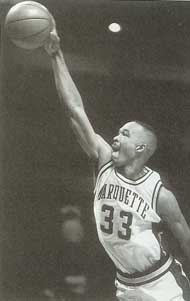 As a senior, Curry led his school to a 26-2 record and the Big 12 Conference title and was named Conference Most Valuable Player.

Curry spurned offers from many Midwest schools to attend the University of Arizona.

He would only spend his freshman year at Arizona.

Ron Curry originally played for Arizona, then when Kevin O'Neill - then an Assistant with Arizona - was named the head coach of the Marquette men's basketball team, he decided to transfer and follow O'Neill to Marquette.

In his first game as a Marquette Warrior, he tallied 24 points and 10 rebounds.

During the 1991-1992 season, Curry led the Great Midwest Conference in field goal percentage, setting the single-season conference record at 59.2%.

In the 1992-93 season, he was named team tri-captain and led Marquette in scoring (14.4 ppg) and rebounding (8.1 rpg). He scored the 1,000th point of his career against the Cincinnati Bearcats and pulled down his 500th career rebound against the Memphis State Tigers. 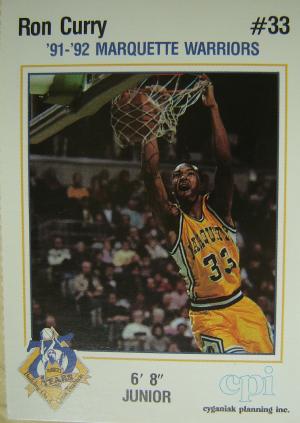 He was drafted in the 6th round of the 1993 CBA Draft by Rapid City.