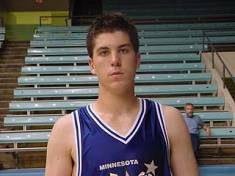 Ryan was a three-year starter at Burnsville High School, averaging 9.7 points and 7.1 rebounds as a sophomore and 23.7 points and 11 rebounds during his junior year. He graduated as the school's all-time leading scorer and rebounder. Amoroso averaged 24.1 points and 12.2 rebounds, leading Bursnville to the Class 4A state championship game in his senior year. Ryan selected Marquette over Minnesota.

Ryan played in a total of 57 games at Marquette, starting eight. He averaged 5.8 points per game and 3.8 rebounds per game. There has been some speculation that Amoroso transferred due to tension with Tom Crean.

Amoroso played in all 31 games, making three starts. He was MU's most productive reserve, averaging six points and 3.6 rebounds in 15.2 minutes. He had six double figure scoring games and MU was 2-1 in games he started. He shot a team high 49.2% from the field and averaged 7.8 points, 4.4 rebounds in Conference USA play, shooting and shot 51.8% from the floor. He was third on the team in rebounding during conference games. He was third on the team in offensive rebounds (44) and scored a career-high 18 points in just 14 minutes against Tulane on January 8th. He collected his first career double-double with 16 points and 12 rebounds at Memphis State on January 13th, becoming the first MU freshman to do so since February 2001. He pulled down eight rebounds in just 13 minutes against No. 22 UW-Madison on December 11th and nearly missed his second career double-double with eight points and nine rebounds in a career-high 26 minutes against East Carolina on February 12th. He received Marquette's Super Sub Award.

Amoroso played in 26 games, starting in five. He scored 10 points in his season debut in 13 minutes against Rice on November 18th on four of seven shooting off the bench. He registered a team leading and career high 30 points against South Carolina in the Great Alaska Shootout Championship game on November 26th and recorded career highs in five other categories; field goals (11), field goal attempts (17), three pointers (3), three point attempts (4) and minutes (30). He also matched a career high of 12 rebounds and five free throws in that game. He recorded back-to-back games of double-digit rebounds adding 10 at Nebraska on November 30th and came off the bench with eight points, including two three pointers, and grabbed three rebounds against Valparaiso on December 7th. He tallied nine points and four rebounds at UW-Madison on December 10th and tallied eight points and a team-high eight rebounds in a start against San Francisco. Ryan registered eight points and a team-high eight rebounds for the second consecutive game against Oakland on December 19th and chipped in nine points and seven rebounds against Lewis on December 28th.

Ryan added four points and five rebounds at Seton Hall on January 11th amd led Marquette in rebounding with seven and added seven points at West Virginia on January 14th. He added 14 points, five rebounds, an assist and a blocked shot in 18 minutes off the bench at Pittsburgh on January 28th and added five poinnts and four rebounds in nine minutes at Rutgers on February 12th.

Sat out the 2006-07 season due to NCAA transfer rules… Practiced with the team throughout the season.

Ryan's parents are Andy and Peggy Amoroso. He also lettered in football and golf at Burnsville High. His hobbies include fishing, poker, golfing and posting videos of himself on YouTube under the screen name “Franchise 040.”