Steve attended Brown Deer High School in Brown Deer, Wisconsin. As a junior, Steve averaged 22.2 points, 12.0 rebounds, and 3.4 blocked shots per game. During his senior season, Novak averaged 20.6 points, 10.4 rebounds, and 5.0 assists per game. Throughout his high school basketball career, he earned four letters and finished with 1,740 points (535 as a senior). Novak was also a three-time Parkland Conference Player of the Year. Novak also earned AP & Journal Sentinel/WBCA all-state honors as a junior and senior. His number 20 has been retired at Brown Deer.

Earned a berth on the Conference USA All-Freshman Team and was chosen as the league's Sixth Man of the Year … Saw action in all 33 games as a reserve, averaging 15.5 minutes and 6.7 points per outing … Topped the team and Conference USA in three-point field goal shooting in both overall (50.5%) and league (51.8%) action, establishing league seasonal records in both categories … His three-point percentage in overall play established a school seasonal record for frosh and ranked No. 2 overall at Marquette while his C-USA effort was good for the No. 1 position on MU's chart … His 55 three-point field goals ranked No. 2 all-time among MU freshmen … Earned a berth on the NCAA Midwest Regional All-Tournament Team … Played a season-long 27 minutes and hit a season-high tying five three-point field goals and finished with 16 points, second high on the team, vs. No. 1 Kentucky (Mar. 29) … Recorded eight games of double-figure scoring … Shot 50 percent or better from the floor in seven of the last eight and in a total of 24 contests … Shot a blistering 56.0 percent (14-of-25) from three-point territory in MU's five NCAA Tournament outings … Sank all four of his three-point attempts, including three in overtime, en route to 14 points in sparking MU to a 101-92 win vs. Missouri (Mar. 22) … Huge game with a career-high 17 points (14 in the second half) against DePaul (Feb. 12), sinking a personal-best six-of-eight from the floor including a then season-high five-of-six from three-point range … His five treys against the Blue Demons eventually tied for the high-water mark by a Golden Eagle during the year … Tallied 11 points and hit a season-high five free throws vs. UAB (Mar. 1) … Finished the Louisville game (Feb. 27) with eight points and tied his season high with five boards … Posted three-point field goals in 13 of MU's last 15 and in a total of 25 games … Picked up nine points on the strength of three treys vs. TCU (Feb. 22) … Scored all nine of his points via the trey during the first half of the Charlotte game (Feb. 20) and recorded five boards in 22 minutes … Connected on five field goals, including three treys, vs. South Florida (Jan. 11) en route to 15 points … Fine effort at Saint Louis (Jan. 7), hitting both three-point field goal attempts along with four three throws en route to 10 points … Knocked down three treys en route to 11 points vs. Eastern Illinois (Nov. 26).

Unanimous First Team All-BIG EAST selection … One of three players to start in every game this season … Led the team in minutes averaging 33.8 minutes per game … Has a school record 354 career three pointers, passing Travis Diener for the top spot … Recorded 1,567 career points passing Don Kojis (10th, 1,504) for the 10th spot all time … Is the sixth player in the program history to have more then 1,500 points and 500 rebounds for his career … Novak led the team at 97.4 percent free throw shooting … He is one of six active NCAA Division I players during the 2005-06 season with over 300 career three pointers joining J.J. Reddick (Duke), Keekee Clark (St. Peters); Taquan Dean (Louisville); Justin Gray (Wake Forest) and Gerry McNamara (Syracuse) … passed Ray Allen's single season 3-point record (63) with 70 dating back to the 1995-96 season … Led the BIG EAST in 3-pointers made per game (3.90) and 3-point field goal percentage (46.7) … ranked third in the nation in three pointers per game (3.9), sixth in the nation in three point percentage (46.7 percent) … One of two players to score double figures in first six games … Named Great Alaska Shootout Tournament MVP after recording 51 total points, including nine three pointers, and 18 rebounds … was 6 of 10 from three-point range, tying the Shootout championship-game record for treys made against South Carolina (Nov. 26) … Became Marquette's all-time free throws leader after making both of his attempts against Valparaiso (Dec. 7) … Led Marquette with 14 points against Wisconsin (Dec. 10) for his eighth double digit scoring effort this season … tallied his second 20-plus point performance this season, 14th for his career, with 22 against San Francisco (Dec. 17) … 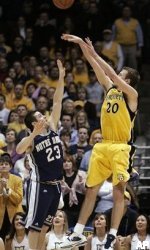 matched his season high number of treys with six against San Francisco … Set career highs in points (41) and rebounds (16) against no. 2 Connecticut (Jan. 3.) for his first career double double … The 41 points was a record for most points by a player in his first BIG EAST game, breaking the record of 30 by Troy Murphy (Notre Dame, Dec. 8, 1998) and Allen Iverson (Georgetown, Dec. 7, 1994) … It was the second highest total against Connecticut in a BIG EAST game (43 Darius Rice, Miami, Jan. 20, 2003) … Novak's 11 free throws ties a high for a single player high for MU this season … Had his second career double double and his second straight, scoring 17 points and grabbing a team high 10 rebounds against Cincinnati (Jan. 7) … Hit his first three free throws of the game, but missed his fourth attempt breaking a string of 68 consecutive free throws, which established a school record … Named BIG EAST Co-Player of the Week for the week of Jan. 9 for his career performance against Connecticut … nearly recorded his third straight double double of the season with a team leading 25 points and nine rebounds and zero turnovers against Seton Hall (Jan. 11) … tied his season high six three pointers for the fourth time this season against Seton Hall … Tallied his fifth 20-plus point performance this season, 16th for his career, with 24 at DePaul (Jan. 17), while matching his season high number of treys (six) for the fifth time this season and third time in five games … Was named BIG EAST Player of the Week for the second time of the season after scoring the game-winning jumper with 1.1 seconds left in the game against Notre Dame (Jan. 25) and finished the weekend averaging 26.0 points and 6.0 rebounds in a 2-0 week … had four threes by halftime, the most first half three pointers by a Marquette player this season and matched his season high number of treys (six) for the sixth time this season against Notre Dame (Jan. 20) … Scored a team high 29 points against St. John's marking his his first double figure scoring game in three outings … Matched his season high number of trey (6) for the seventh time this season, 11th of his career … Passed Robb Logertman for the most three point field goals by a Marquette player in his senior season with 121 threes … Recorded five three pointers against Georgetown (Feb. 16) to break Travis Diener's single season three point record … scored his ninth game of 20 or more points, 20th for his career, at Notre Dame (Feb. 25) with 21 points … recorded his thrid double double of the season at Notre Dame scoring 21 points and grabbing 11 rebounds … scored his 10th game and 11th game of 20 or more points, 21st and 22nd of his career at Louisville (March 1) and against Providence (March 4) … Made six treys for the eighth time this season against Providence … Sunk six 3-pointers for the ninth time this season against Georgetown (March 9) … added five boards and has averaged 7.2 rpg in the last four contests. 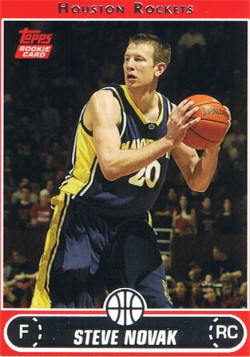 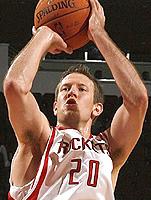 On November 11, Novak was assigned to the Rio Grande Valley Vipers of the NBDL after not seeing any regular season minutes. He finished the 2007-08 season averaging 7.5 mpg, 3.9 ppg and 1.0 rpg, while achieving a 0.480 field goal and 0.479 three-point percentage in 35 games played.

After averaging 2.7 ppg in 79 games of his first two seasons with Houston, the Rockets avoided free agency with Novak and exercised their option to extend Novak's contract for a third season at $797,581.

On August 6, 2008, the Rockets dealt Steve Novak to the Los Angeles Clippers for the option to exchange second round picks with the Clippers in 2011. Clippers GM Elgin Baylor addressed the acquisition of Novak: “Steve is a terrific perimeter shooter who will definitely help open the floor and create more opportunities for our post players…We are happy to bring him to Los Angeles.” Clippers head coach Mike Dunleavy also stated, “We are pleased to add Steve to our roster…He is an excellent shooter who will help us space the floor and keep defenses honest.”