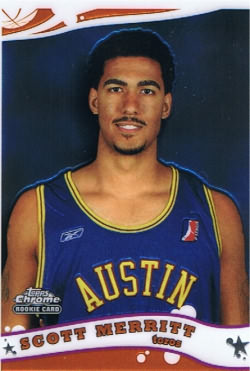 Finished career as Marquette's all-time leader in games played with 126. He is the only player in school history to record over 1,000 points, 600 rebounds, 100 assists, and 100 blocked shots for his career. Posted 20 career double-doubles.

Averaged 5.9 points and 4.4 rebounds in 20.1 minutes a contest. Started 20 of 33 games. Scored in double figures five times, with a career-high 22 points on 8-for-12 shooting against Morris Brown in his first career start. Recorded a double-double of 15 points and 13 rebounds against Arkansas-Pine Bluff. Tallied ten points and a team-high eight rebounds against Cincinnati.

Scott briefly played for Tris Riggio Calabria, an Italian professional team. The official notice of signing was September 3, 2004. He would later leave the team on October 3.

His brief statistics while with Calabria:

Selected by Columbus in the 5th round (#25 pick overall) of the 2004 NBA D-League Draft. Played for the Columbus Riverdragons in the NBA Development League in 2004-05, averaging 13.0 points and 6.4 rebounds. Started 40 of 41 games. Earned Honorable Mention All-D-League honors.

While playing for Columbus, he finished the 2004-05 NBDL season ranked in the following statistical categories:

For the 2005-06 NBDL season, Merritt was signed by the Austin Toros. He was waived on March 21 and later signed by Fayetteville on March 23.

During the summer of 2005, he played for the Mavericks Summer Pro League. DraftExpress D-League Scout writer, Richard Walker, said this about his performance: “Merritt has been the most consistent player on the Mavericks SPL team, scoring with efficiency and boarding well. He has excellent footwork on the block and in one particular play on Saturday's game made a beautiful floater while in transition. Based solely on the first half he's a shoe-in to get an invite to camp.” DraftExpress Summer Pro League 2005 Article

In the 2006-07 preseason, Merritt was added to the Chicago Bulls training camp roster on October 2. On October 11, the Bulls waived him.

During the 2006-07 NBDL season, Merritt began the season with the Austin Toros, starting 6 games. On January 22, he was traded to the Tulsa 66ers for guard Cheyne Gadson. He would only see action as a substitute for the 66ers before being waived by them - due to injury - on February 9.

In 2007, he was briefly - three games - with SKK Kotwica Kolobrzeg, a Polish team in the Dominet Basket Ekstraliga (DBE) - Poland's highest basketball league. He tallied 11 points, 3 rebounds, and 2 assists in 36 total minutes of play.

During the summer of 2008, he signed with Budivelnyk Kyiv of the Ukrainian Basketball League but only played in seven games, averaging 12.3 ppg and 4.9 rpg. He left Budivelnyk Kyiv for Intercollege Etha Engomis of Cyprus's Division A League. He is one of their top players averaging 15.3 ppg and 8.3 rpg through three games.