Dwight played two years at Christina High School in Delaware and one year at Rice in New York, before attending Saint Benedict's. Burke was ranked as one of the nation's top 50 fifth year players. He averaged 9.2 points, 8.8 rebounds and 3.5 blocks and shot a team best 61.0% from the field in helping lead St. Benedict's to a 26-1 record and the New Jersey state prep school championship. Burke originally signed a letter of intent with East Carolina in November 2004.

Claimed MU's Bart Miller Standard of Excellence Student-Athlete Award … ranks ninth all-time in career games played (124) … Posted four rebounds vs. Milwaukee (11/22) … Garnered a season-high six rebounds and a blocked shot vs. Northern Iowa (11/28) … Matched a career-high with two blocked shots vs. Central Michigan and had five boards (12/2) … Scored five points and matched a season-best with six rebounds vs. IPFW (12/13) … Played a career-high 32 minutes vs. Tennessee (12/16) … Was 4-of-4 from the foul line and contributed six points, six rebounds and an assist in 16 minutes vs. Presbyterian (12/28) … Grabbed six defensive rebounds vs. Cincinnati (1/4) to match a season high … Shot a perfect 4-of-4 from the field and scored a season-high eight points and had four rebounds and a steal at Rutgers (1/7) … Grabbed five rebounds and matched a career high with two blocked shots vs. West Virginia (1/10) … Matched a career-high with 32 minutes played and chipped in 10 points and seven rebounds, both season highs, vs. DePaul (1/24); also shot a perfect 4-of-4 from the floor against the Blue Demons … Grabbed seven rebounds vs. Seton Hall (2/17), matching a game-high and personal season-high … Was 2-of-2 from the field and finished with seven points and four offensive rebounds at Pittsburgh (3/4) … Matched a career high with 10 rebounds vs. Missouri (3/22) … earned fourth letter.

Co-recipient of the Bart Miller Standard of Excellence Award … Appeared in each of the team's 35 games, earning 17 starting assignments … Earned first career start in season opening win vs. IUPUI (11/10) and contributed two points in 16 minutes … Scored career-high 12 points, including 10 in the first half, and tallied eight rebounds while shooting 5-of-6 from the field vs. Utah Valley (11/12) … Shot 2-of-3 with four points and four rebounds in 12 minutes vs. Chaminade (11/19) … Established a career high with three steals and recorded one blocked shot in 18 minutes vs. Oklahoma State (11/20) … Played 11 minutes vs. Duke (11/21) and scored two points with two rebounds … Contributed seven points, netting all three of his field goal attempts, and grabbed three rebounds vs. UW-Milwaukee (11/30/07) … Shot 4-of-5 from the field and 4-for-5 from the charity stripe to match career highs and recorded 12 points and two blocks, including a career-high nine rebounds vs. Wisconsin (12/8) … Tied a career mark with three steals while posting five points, five rebounds and one block vs. Sacramento State (12/15) … Tallied two points and two rebounds in 12 minutes vs. IPFW (12/17) … Played eight minutes vs. Coppin St. (12/21), collecting two rebounds, a blocked shot and a pair of free throws … Recorded five rebounds, including two offensive boards vs. Savannah State (12/29) … Recorded one block and a pair of rebounds vs. Providence (1/3) … Grabbed three rebounds and recorded one assist vs. West Virginia (1/6) … Matched a career high with two assists and grabbed four rebounds, all on the offensive glass vs. Notre Dame (1/12) … Registered five points and four rebounds, including three offensive boards, vs. USF (1/29) … Grabbed three rebounds and was 1-of-1 shooting from the field in four minutes of action at Seton Hall (2/12) … Ignited the Bradley Center crowd with a put-back dunk with 31 seconds remaining in regulation to give MU a two-point lead over Georgetown (3/1) and finished with five points and four rebounds … Grabbed a career-high 10 rebounds, including five on the offensive glass and seven boards in the first half, vs. Pittsburgh (3/14) … concluded the year averaging 2.5 points and 2.9 rebounds per game … Earned third letter. 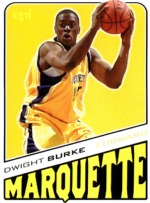 Dwight played in 20 games, averaging 5.3 minutes per game. In his Marquette debut, he came off the bench and made both of his free throw attempts and grabbed one rebound against Eastern Washington on November 23rd. He played eight minutes against South Dakota State on December 3rd, tallying two rebounds and two points. Burke played six minutes against Delaware State on December 22nd and against Lewis on December 28th. He registered a career-high three points against #2 Connecticut on January 3rd, coming off the bench to tally a layup 13 seconds into the game. He played nine minutes at Seton Hall on January 11th.

Dwight is the son of Anthony Burke and Wendy Nurse. He has three brothers- Reece, Isiah and Elijah and four sisters- Tomica, Jasmyn, Anissa and Kayla. He majors in communications studies.