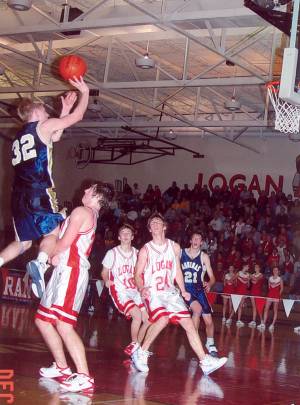 After Christopherson played his first two prep years at Melrose-Mindoro, where he averaged 22.5 points and 7.3 rebounds per game for the Mustangs in his final season, he then transferred to Aquinas. In his first year at Aquinas, he averaged 20.6 points per game

As a Blugold senior, Christopherson would lead Division 3 LaCrosse Aquinas to a 26-1 season (12-0 conference) as well as the WIAA Tournament Championship Game. Aquinas lost the title match to St. Catherine's, 60-56, as Christopherson tallied 18 points on 6 for 21 shooting, 4 assists, and 3 rebounds.

His senior season averages were 22.5 points, 5.8 rebounds and four assists per game.

Scott committed to play basketball at Marquette his sophomore year of high-school.

Scott entered 2007-08 as a member of a four member recruiting class for Marquette. The other members included Trevor Mbakwe and Patrick Hazel. Christopherson selected Marquette over UW-Madison and Washington State.

Scott missed several games early in the season, as he recovered from knee surgery. He appeared in 18 games, averaging 1.3 points, .7 rebounds and .1 assists, shooting 42% from the floor and 40% from three-point range.

Scott was unhappy and considered transferring while Tom Crean was still at Marquette. He saw Dominic James, Jerel McNeal, Wesley Matthews, David Cubillan and Maurice Acker in front of him, and Tyshawn Taylor and Nick Williams coming in behind him, and did not believe he had a role.

When Crean left he waited to see who the new coach was. When Buzz was hired, they immediately call a team meeting, and Buzz went in and told the team himself that he was their new coach. He explained how he would run things, how the team would play. Scott knew the up and down style Buzz wanted did not favor him. When the meeting ended, Scott stayed behind and asked Buzz if they could talk. He told Buzz he wanted a release. Buzz asked him to think about it for a couple of days but Scott had made his mind up, so that was it, but they wanted to keep it quiet until after the banquet.

Scott already knew what schools he was going to consider, even before Buzz was hired. His longtime high school girlfriend was a student at Iowa. She was considering a transfer to Iowa State due to her major. He selected Iowa State and she transferred to ISU.

Sat out season as a redshirt.

Started the final 15 games of the season…averaged 7.9 points, 2.0 rebounds and made 45 3-pointers…connected on 42.9 percent (45-105 3FG) of his shots from 3-point range, the ninth-best single-season 3-point FG percentage tally in school history…led ISU at the free-throw line at 84.6 percent (33-39 FT)…posted double figures in scoring 13 times and made two or more treys in a game 15 times…finished strong, averaging 12.1 points in the last seven games…made four 3-pointers vs. Oklahoma, Oklahoma State and Kansas State…tallied a career-high 19 points vs. Oklahoma State (7-12 FG; 4-9 3FG)…was instrumental in ISU’s upset win at No. 5 Kansas State, recording 18 points on 5-of-7 shooting from the floor, including a 4-of-4 effort from downtown…his 4-of-4 effort from 3-point range vs. KSU ties the best effort on ISU’s single-game 3-point percentage list (minimum four attempts).

Scott is the son of Dale and Sue Christopherson, one of three children. He has two sisters, Ashleigh and Elizabeth. He was a business major. His dad, Dale, played basketball collegiately for UW-Stevens Point.